Rebecca (1940) is an American romantic thriller directed by Alfred Hitchcock—in his American directorial debut—and starring Laurence Olivier and Joan Fontaine. The screenplay was written by Robert E. Sherwood and long-time Hitchcock associate, Joan Harrison. The film score was written by Franz Waxman and the cinematography was by George Barnes who won an Academy Award for his work on this film.

The film was producer and filmmaker David O. Selznick‘s follow up to Gone with the Wind (1939). It would be impossible for Selznick to match that success in his long career, but Rebecca won Best Picture and a Best Actress Academy Award for Joan Fontaine. It was a critical and commercial success and one of the biggest hits of the year.

Laurence Olivier (1907 - 1989) was an English actor and director who was one of the most celebrated actors of the 20th century. Olivier attended drama school in London where he learned his craft. He made his West End debut in Noel Coward‘s Private Lives (1930). More successes followed and he eventually made his way to Hollywood. He had a huge success with his role as Heathcliff in Wuthering Heights (1939) and Rebecca the next year. Olivier‘s career in films also includes lead roles in Henry V (1944), Hamlet (1948), Richard III (1955), Spartacus (1960).

Others in the cast include Judith Anderson as Mrs. Danvers and George Sanders as Jack Favell. 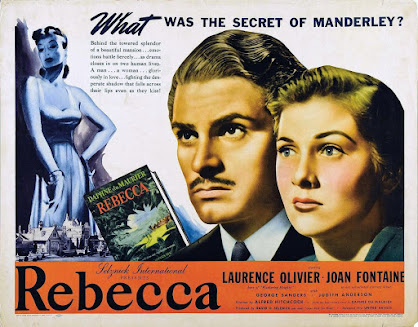 Posted by Stephen Reginald at 4:53 PM