Charles Laughton and Maureen O’Hara check in at “Jamaica Inn”

Jamaica Inn (1939) is a British period adventure movie directed by Alfred Hitchcock and starring Charles Laughton, Maureen O’Hara, and Robert Newton. The film is based on the novel of the same name by Daphne du Maurier. The screenplay was written by long-time Hitchcock collaborators Sidney Gilliat, Joan Harrison, and Alma (Mrs. Hitchcock) Reville.

A modest inn in Cornwall is the headquarters for a gang of murderers and thieves. The gang plans a series of shipwrecks by extinguishing the warning lights along the coast. After the ships run aground, the gang kills the surviving crew and steals the cargo.

Mary Yellan (O’Hara) goes to live with her Aunt Patience, her deceased mother’s sister, at Jamaica Inn. Immediately, Mary fears things are not quite right. She becomes acquainted with Sir Humphrey Pengallan (Laughton), the local squire who takes a shine to her and treats her kindly. As Mary becomes more and more suspicious of the goings-on at Jamaica Inn, she fears for her life and doesn’t know who to trust. 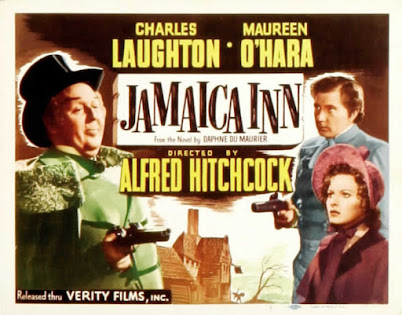 Maureen O’Hara (1920 - 2015) was an Irish-American actress and singer. In her native Ireland, O’Hara trained with the Abbey Theatre at age 14. She screen-tested for the role of Mary Yellan in Jamaica Inn at age 19. Director Hitchcock wasn't impressed with O’Hara’s test but Laughton persuaded him to cast her. After finishing the film, O’Hara moved to Hollywood where she was signed to contract at RKO. In 1941 she starred in How Green Was My Valley, her first collaboration with director John Ford. She starred alongside Tyrone Power in The Black Swan (1942), The Spanish Main (1945) with Paul Henreid, and Sinbad the Sailor (1947) with Douglas Fairbanks Jr. That same year she starred in the Christmas classic Miracle on 34th Street with John Payne, Edmund Gwenn, and a young Natalie Wood. Other popular films include The Quiet Man (1952), The Parent Trap (1961), and McLintock! (1963).

To join the discussion of this film on April 27, 2021, at 6:30 p.m. on Zoom, click here. Once you RSVP, you will receive an email with an invitation and link to the meeting.

Posted by Stephen Reginald at 3:45 PM