Frank Sinatra is “The Man with the Golden Arm”

The Man with the Golden Arm (1955) is an American film drama directed by Otto Preminger and starring Frank Sinatra, Eleanor Parker, and Kim Novak. It is based on the novel of the same name by Nelson Algren, although not a completely faithful adaptation. The movie features a jazz-inspired film score composed, arranged, and conducted by Elmer Bernstein.
The movie centers around Frankie Machine (Sinatra), a former card dealer, recently released from a drug rehab center who tries to start his life over as a musician specializing in the drums. When he returns to his old dilapidated neighborhood on the North Side of Chicago, all the old demons start to pull at him including his clinging wife Zosh (Parker) who may or may not be an invalid, Zero Schwiefka (Robert Strauss) his former boss running illegal card games, and “Nifty Louie” Fomorowski (Darren McGavin) his former drug-dealer who is trying to hook him on drugs once again.
To complicate Frankie’s life further, he runs into an old flame, Molly Novotny (Novak). Molly and Frankie have strong feelings for one another but Frankie feels obligated to take care of Zosh.
Will Frankie break free from all the things dragging him back to his old life of drugs and desperation or is he doomed to a life of addiction and hopelessness? 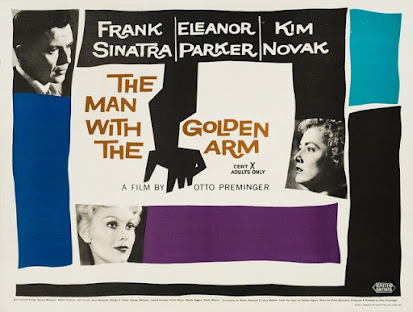 Otto Preminger (1905 -1986) was an American film director who made more than 35 feature films during a five-decade career. Born in Austro-Hungarian into a Jewish family. Preminger was drawn to acting from an early age and became the apprentice of famed stage director Max Reinhardt. In 1935, he was recruited by Twentieth Century-Fox to apprentice as a director at the studio. After a rocky start, Preminger established himself as an A-list director after Rouben Mamoulian was fired from Laura (1944). The film noir classic made stars of Gene Tierney and Dana Andrews and is considered one of the best film noirs of all time. While under contract to Fox, Preminger directed Fallen Angel (1945), Centennial Summer (1946), Forever Amber (1947), and Daisy Kenyon (1947), the latter starring Joan Crawford, Dana Andrews, and Henry Fonda. After he left Fox, Preminger became a maverick, constantly clashing with members of the Production Code. He released two films without the approval of the Production Code: The Moon is Blue (1953) and The Man with the Golden Arm (1955). Both films were financial successes and helped bring an end to the Code entirely. Later successes for Preminger include Anatomy of a Murder (1959) and Exodus (1960).
Frank Sinatra (1915 - 1998) was an American singer and actor. He is considered one of the greatest musical talents of the 20th century. Sinatra began his career singing with the big bandleaders of the swing era before his film career. He had his first leading film role in Higher and Higher and Step Lively (both 1944) at RKO. In 1945, he starred opposite Gene Kelly and Kathryn Grayson in Anchors Aweigh. The movie was a major hit and Sinatra co-starred again with Kelly in Take Me Out to the Ball Game and On the Town ( both 1949). His movie career slumped in the early 1950s and it looked like his career was over. In 1953, Sinatra won the role of Maggio in From Here to Eternity co-starring Burt Lancaster, Montgomery Clift, Deborah Kerr, and Donna Reed. He won the Academy Award for Best Supporting Actor and his movie career was back on track. More hit films followed including Guys and Dolls, The Tender Trap, and Not as a Stranger (all 1955). Perhaps his most famous film that year was The Man with the Golden Arm. For his performance in that film, he received an Academy Award nomination for Best Actor. Sinatra’s film and recording career continued into the 1980s. Other notable films include High Society (1956), The Manchurian Candidate (1962), Come Blow Your Horn (1963), The Detective (1968), and The First Deadly Sin (1980).
Eleanor Parker (1922 - 2013) was an American actress in film and a three-time Best Actress Academy Award nominee. She signed a long-term contract with Warner Bros. in 1941. For the next few years she played minor roles in some important films, but her first big role came in Between Two Worlds (1944) opposite John Garfield and Paul Henreid. She was again cast alongside Garfield in Pride of the Marines (1945) and that film made her a star. Some of the films she made after that were not as successful and Parker was more careful choosing film roles, often refusing parts and being put on suspension. Warners cast her (after much lobbying from Parker) in Caged (1950), a film about a woman’s prison. The film was a hit and her performance earned Parker her first Best Actress Academy Award nomination. For her performance, she won the Volpi Cup for Best Actress at the Venice Film Festival. After leaving Warners, Parker freelanced for a while with limited success. In 1953, she signed a long-term contract with M-G-M. At her new studio, she co-starred with Clark Gable, Robert Taylor (they made three films together), and Glenn Ford. One of her most celebrated roles was as opera singer Marjorie Lawrence in Interrupted Melody (1955) which earned her third Oscar nomination. In the mid-50s, Parker was one of the most popular female stars in the movies. With all her accomplishments during her prime, she will most likely be remembered for her role as Baroness Elsa Schraeder in The Sound of Music (1965), one of the most popular and successful films of all time.
Kim Novak (1933 - ) is an American film and television actress. She retired in 1991. Novak was one of the last “studio-created” stars during a time when the studio system was in decline. Born Marilyn Pauline Novak in Chicago, her name was changed to Kim after she signed a long-term contract with Columbia Pictures in 1954. By the next year, Novak was a major star working opposite the likes of Frank Sinatra and William Holden. Some of her major films include Picnic (1955), The Man with the Golden Arm (1955), The Eddy Duchin Story (1956), Pal Joey (1957), Bell, Book and Candle (1958). Perhaps her most celebrated film is her dual role in Vertigo (1958) co-starring James Stewart and directed by Alfred Hitchcock. In 2012, the British Film Institute’s Sight & Sound critic’s poll voted Vertigo as the best film of all time. After retiring from film, Novak has devoted herself to painting and has exhibited her work publicly.
The Man with the Golden Arm trivia
To watch the film on YouTube, click the link below.
Why watch this film?
To join the discussion on July 19, 2021, at 6:30 p.m., click here. Once you RSVP, you’ll receive an invitation and link to the discussion on Zoom.
Discussion questions:
Posted by Stephen Reginald at 3:43 PM