Family Plot (1976) is a thriller comedy directed by Alfred Hitchcock and starring Karen Black, Bruce Dern, Barbara Harris, and William Devane. The supporting cast features Cathleen Nesbitt, Ed Lauter, and Katherine Helmond. The screenplay was written by Ernest Lehman (North by Northwest, The Sound of Music), and the music was by John Williams.

The plot involves two couples: a fake psychic Blanch Tyler (Harris) and her cab-driver boyfriend George Lumley (Dern), the other couple are professional thieves and kidnappers (Devane and Black) and how their lives cross paths.

Blanch (Harris) is hired by Julia Rainbird to help find her nephew who was given up for adoption to avoid a family scandal. Little do Blanch and George realize that the man they are looking for, now known as Arthur Adamson (Devane), is a murderer, thief, and kidnapper! Arthur’s live-in girlfriend  Fran (Black) has cooperated with him on the kidnappings and thefts but is growing weary of their criminal lifestyle.

Will Arthur and Fran’s latest caper be successful or will Blanch and George get in the way? 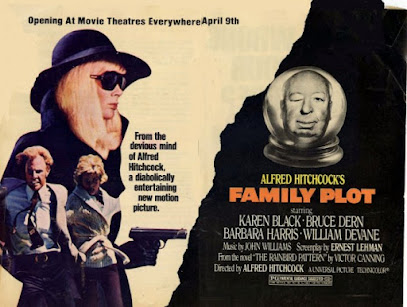 Karen Black (1939 - 2013) was an American actress, singer, and songwriter. Black was born in Park Ridge, IL, and studied theater at Northwestern University. She eventually dropped out and moved to New York. She appeared on Broadway in 1965 and made her film debut the next year in Francis Ford Coppola’s You’re a Big Boy Now. She had supporting roles in Easy Rider (1969) and Five Easy Pieces (1970) which earned her an Academy Award nomination for Best Supporting Actress. She really hit her stride in the mid-1970s with starring roles in The Great Gatsby (1974), Airport 1975 (1974), Nashville (1975), and The Day of the Locust (1975). In Nashville, for her role as a country singer, Black wrote and sang her own songs. After her run in the 70s, Black concentrated on small, independent films and made a name for herself in science fiction and horror movies, starring in the remake of Invaders from Mars (1986) and House of 1000 Corpses (2003).

Bruce Dern (1936 - ) is an American film actor who often portrays characters who are either villainous, unstable, or both. He has twice been nominated for Academy Awards. Dern worked steadily in films from 1960 to the present. One of his early roles was that of a sailor in Alfred Hitchcock’s Marnie (1964) and as John Mayhew in Robert Aldrich’s horror classic Hush...Hush, Sweet Charlotte (1964). Dern was in high demand as a character actor, often making five movies a year. Some other movies that featured Dern include Support Your Local Sheriff! (1969), Silent Running (1972), The Great Gatsby (1974), Black Sunday (1977), and Coming Home (1978). He is the father of actress Laura Dern.

Barbara Harris (1935 - 2018) was an American actress. Harris starred on Broadway, television, and film. She created the role of Daisy Gamble in the musical On a Clear Day You Can See Forever (1965). She had roles on Alfred Hitchcock Presents, Naked City, and The Defenders. Harris’s first screen role was in A Thousand Clowns (1965) co-starring Jason Robards. Other films include Plaza Suite (1971), The War Between Men and Women (1972), Nashville (1975), and Freaky Friday (1976).

Why watch this movie?

Posted by Stephen Reginald at 4:39 PM