Odds Against Tomorrow (1959) is an American film noir, produced and directed by Robert Wise and starring Harry Belafonte, Robert Ryan, and Shelley Winters. The film features a jazz film score directed by John Lewis of the Modern Jazz Quartet.

A former policeman (Ed Begley), an ex-con (Robert Ryan), and a nightclub entertainer (Harry Belafonte) join forces to rob a bank in upstate New York. There is tension between Earle Slater (Ryan) and Johnny Ingram (Belafonte) due to Slater's racism against Ingram who is black. David Burke (Begley), the mastermind of the robbery does his best to keep the tension between Slater and Ingram to a low boil.

Will Burke be able to keep Slater and Ingram on task to get the job done or will it all blow up before right in front of him? 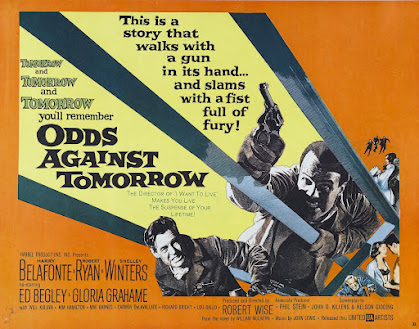 Robert Wise (1914 - 2000) was an American director, producer, and editor. Wise began his movie career at RKO as a sound and music editor. For several years, he worked with senior editor William Hamilton. Wise’s first solo film editing credits were on Bachelor Mother (1939) and My Favorite Wife (1940). He was the film editor on Citizen Kane and was nominated for an Academy Award for Film Editing. Wise got his chance to direct at RKO from Val Lewton, the producer of horror classics like Cat People (1942). The Curse of the Cat People (1944) was the first film that Wise received director credit for. He eventually directed films noir, westerns, melodramas, and science fiction. Some popular films directed by Wise include The Day the Earth Stood Still (1951), Executive Suite (1954), I Want to Live! (1958), which earned Wise his first Oscar nomination for Best Director. He went on to win Best Director Oscars for West Side Story (1961) and The Sound of Music (1965).

Harry Belafonte (1927 - ) is an American singer, songwriter, and actor. As a singer, he popularized the Caribbean music style to an international audience. He had the first million-selling album by a single artist in 1956. Belafonte made his movie debut in Bright Road (1953) co-starring Dorothy Dandridge. The next year he starred with Dandridge again in Carmen Jones (1954) directed by Otto Preminger. In 1957 Belafonte starred alongside James Mason, Joan Fontaine, and an all-star cast in Island in the Sun. He didn't like the film roles that he was offered during the late 50s and early 60s so he decided to concentrate on his singing career.

Robert Ryan (1909 - 1973) was an American film and stage actor. Ryan got his start in acting with a theater group in Chicago, where he was born, in the late-1930s. By 1939, he had a film contract with Paramount appearing in minor roles in a variety of pictures. In 1943, he signed a long-term contract with RKO based on his stage performance in Clash by Night (1941). The studio was grooming him for stardom with 1943’s Tender Comrade co-starring Ginger Rogers when he enlisted in the United States Marine Corps, serving as a drill instructor. He resumed his career after the war and was nominated for a Best Supporting Actor Academy Award for his performance in Crossfire (1947). Ryan worked on stage, TV, and in film during the next three decades. His other film roles include The Set-Up (1949), Flying Leathernecks (1951), On Dangerous Ground (1951), Clash by Night (1952), and Bad Day at Black Rock (1954).

Shelley Winters (1920 - 2006) was an American actress whose career in film began in 1943 and continued into the 2000s. Some of Winters’s film roles include A Double Life (1947), The Great Gatsby (1948), Winchester 73 (1950), and A Place in the Sun (1951) for which she was nominated for a Best Actress Academy Award. Winters was in demand throughout the 1950s having four films in release in 1955 including Night of the Hunter. She won a Best Supporting Actress Academy Award for The Diary of Anne Frank (1959). She won her second Best Supporting Actress Oscar for her performance in A Patch of Blue (1965). Besides her film work, Winters starred on Broadway and was a frequent guest star on popular television series and made-for-TV movies.

Shot on location in New York City, Robert Ryan lived at the Dakota and later sold his apartment to John and Yoko Lenon.

Posted by Stephen Reginald at 12:47 PM