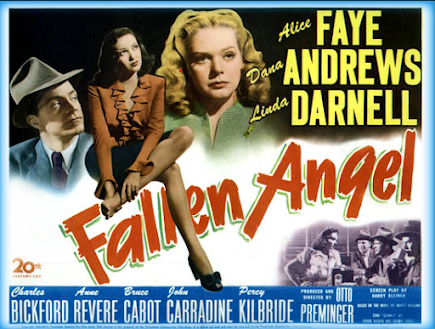 This was director Otto Preminger’s follow-up to Laura released the year before. The cinematography was by Joseph La Shalle, who won an Academy Award for his work on Laura. Also on board for Fallen Angel was David Raksin, who wrote the film score. He composed the music for Laura, one of the most famous film scores in movie history. Last, but not least, Andrews who played Mark McPherson opposite Gene Tierney in Laura, has the male lead in Fallen Angel. Andrews made five films with Preminger, more than any other leading man.Faye, the musical queen on the Fox lot, was looking to move into dramatic roles. She loved Laura and wanted to star in a similar mystery. As already noted, she got a lot of the same talent that was involved with that film noir classic. When Faye saw the finished film, she felt that the movie emphasized Darnell’s role to the detriment of her own. She was so distressed that she walked out on her contract. Studio boss Darryl Zanuck begged her to come back, promising her roles in prestige films in the planning stages like The Razor’s Edge, but Faye was done. She didn’t return to the big screen until 1962’s State Fair.

Darnell was signed to a contract at 20th Century Fox at age 15. Because she looked older than her age, she worked as a leading lady from the outset, with the studio claiming she was 19. Her role in Fallen Angel helped turn her into a popular pin-up during World War II. In 1944, Look magazine named her one of the four most beautiful women in Hollywood, along with Hedy Lamarr, Ingrid Bergman, and Fox colleague, Gene Tierney.Interested in classic film? Consider joining the Chicago Film Club. It’s free to join and you’ll be made aware of future discussions and classic movie screenings in Chicago.

Posted by Stephen Reginald at 7:25 PM