Force of Evil (1948) is an American film noir directed by Abraham Polonsky and starring John Garfield. The film is based on the novel Tucker's People, which was adapted by Polonsky and Ira Wolfert from a novel by Wolfert. The music is by David Raskin (Laura, Fallen Angel, The Bad and the Beautiful).
Garfield stars as lawyer Joe Morse who works for a big-time gangster Ben Tucker (Roy Roberts) who runs the numbers racket in New York City. Things get complicated when the gangster Joe works for eats up all the smaller rackets, including Joe's brother Leo (Thomas Gomez).
Will Joe be able to protect his brother and still be effective as the lawyer for Tucker? 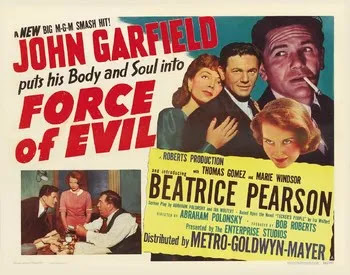 Abraham Polonsky (1910 - 1999) was an American film director, screenwriter, and novelist. He was nominated for an Academy Award for Best Original Screenplay for Body and Soul (1947) starring John Garfield. Polonsky earned a law degree from Columbia Law School but after a few years of practicing law and teaching, he decided to be a writer. Other films Polonsky directed include Tell Them Willie Boy Is Here (1969) and Romance of a Horse Thief (1971). Polonsky was a member of the Communist Party and a Marxist. These affiliations hindered his career in Hollywood after he directed Force of Evil.
John Garfield (1913 - 1952) was an American actor who specialized in brooding, rebellious characters. Garfield was a popular stage actor with the Group Theater in New York when Hollywood came calling. Garfield's first film was Four Daughters (1938). The movie was a big success and Garfield's performance was praised. He received a Best Supporting Actor Academy Award nomination for his role as troubled musician Mickey Borden. His success in his first film led to a long-term contract with Warner Brothers. Other films Garfield starred in include They Made Me a Criminal (1938), Juarez (1939), Castle on the Hudson (1940), Out of the Fog (1941), Destination Tokyo (1943), and The Postman Always Rings Twice (1946), and Body and Soul (1947) for which he was nominated for the Academy Award for Best Actor. Garfield had long-term heart problems. Against the advice of his doctor, he played tennis the day he passed away.
To watch the film on YouTube, click on the link below.
To join the discussion on July 11, 2022,  at 6:30 p.m. Central Time, click here. Once you RSVP, you will receive an invitation and a link to join the discussion on Zoom.
Force of Evil trivia
Discussion questions
Posted by Stephen Reginald at 4:34 PM