Ann Sheridan is a "Woman on the Run"

Woman on the Run (1950) is an American film noir directed by Norman Foster and starring Ann Sheridan and Dennis O’Keefe. Members of the supporting cast include Robert Keith, John Qualen, Ross Elliot, and Frank Jenks. The cinematography was by Hal Mohr (Captain Blood, A Midsummer Night’s Dream, Phantom of the Opera).

Frank Johnson (Elliot), a down-on-his-luck painter is a witness to a murder while walking his dog. Because Frank got a good look at the killer, the police are anxious to get him into protective custody. Frank having second thoughts about possibly testifying against the killer goes missing. Inspector Martin Ferris (Keith) finds Johnson’s wife Eleanor (Sheridan) and tries to get her to reveal where he is hiding. The problem is that Eleanor has no idea. Ferris soon discovers that things between Eleanor and Frank aren’t perfect so maybe Eleanor is in no rush to find Frank. Enter Daniel Legget, a local reporter who tries to help her find her husband if he can get an exclusive on the story. During Frank’s absence, Eleanor learns things about her husband that she didn’t know anything about including a heart condition that he is taking medication for.

Will Frank eventually show up safe and sound, or is he doomed to die at the hands of the killer he saw the night he was walking his dog? 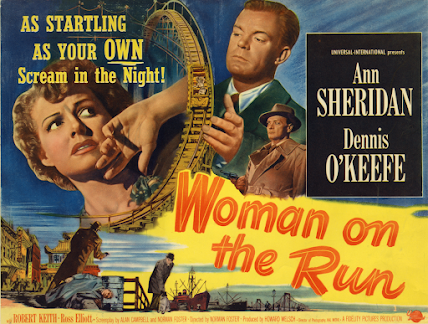 Norman Foster (1903 – 1976) was an American actor, film director, and screenwriter. Foster was a stage film actor. Foster was a popular film actor during the pre-Code era. One of his popular pre-Code efforts was Rafter Romance (1933) co-starring Ginger Rogers. During his directing career he directed several films in the Charlie Chan and Mr. Moto series. He directed feature films including Kiss the Blood off My Hands (1948) starring Joan Fontaine and Burt Lancaster and Rachel and the Stranger (1948) starring Loretta Young, William Holden, and Robert Mitchum. He also directed the Zorro and Davey Crockett television series for Walt Disney. Foster was married to Claudette Colbert from 1928 to 1935.

Ann Sheridan (1915 - 1967) was an American actress and singer. Her movie career began in 1934 where she appeared in 19 films! Her roles were all small and mostly unbilled, but she appeared in another 20+ films before she was signed to Warner Bros. in 1938. She was given better roles and was groomed for major stardom. The studio dubbed her “The Oomph Girl,” a title she hated but helped contribute to her popularity. During World War II she was a popular pin-up girl. As a star, Sheridan starred in Angels Wash Their Faces (1939), Castle on the Hudson (1940), It All Came True (1940), They Drive by Night (1940), City for Conquest (1941), and The Man Who Came to Dinner (1942). During this time she starred opposite Warner’s top leading men including John Garfield, James Cagney, and George Raft. Her biggest success during this period came with Kings Row (1942), a film in which she received top billing over Robert Cummings, Ronald Reagan, and Betty Field. Sheridan made the transition to television and was starring in the weekly western series, Pistols 'n' Petticoats (1966-67) when she became sick with cancer. She died on January 21, 1967, at the age of 51.

Woman on the Run trivia

Posted by Stephen Reginald at 10:04 PM