Anita Ellis, the voice behind "Put the Blame on Mame"

Anita Ellis (b. 1920), who did the singing for Rita Hayworth in Gilda

and several other Hayworth

films, might have had a more visible career as a vocalist if she wasn’t consumed by stage fright.

Paralyzing fear
Ellis didn’t just have butterflies before live performances; she became paralyzed, unable to perform. Fortunately, radio was big in the 1940s and Ellis was able to find steady work. Her popularity as a radio vocalist lead to jobs singing for non-singing actresses in the movies. This was the perfect situation for a singer who couldn’t face an audience. Without hundreds of eyes staring at her, Ellis was able to sing, “Put the Blame on Mame” with real gusto and personality. Her voice and Hayworth’s perfect lip-synching have many convinced to this day that it’s Hayworth’s voice, not Ellis’s belting out that famous tune.

A musical family
Ellis was born Anita Kert on April 12, 1920, in Montreal, Canada. She was raised in a Jewish Orthodox family. Her father was a cantor at their synagogue, so Anita’s singing wasn’t encouraged for religious reasons. However, Ellis’s mother sang and played piano and made sure that her daughter’s musical talent didn’t go to waste. Ellis won a scholarship at age 17 to the Cincinnati Conservatory of Music. It was when she began studying there that she discovered her stage fright and its implications to a career as a vocalist.

A star on the radio
Then there was radio. On the radio, without the fear of performing in front of a large audience, Ellis found her niche. She became a regular on Red Skelton’s radio show and made some record recordings. It was during her stint on radio where she was given the opportunity to sing for the movies, making audiences believe that Rita Hayworth, Vera Ellen, Shelley Winters, Joan Caulfield, and Jeanne Crain could sing like, well, Anita Ellis. 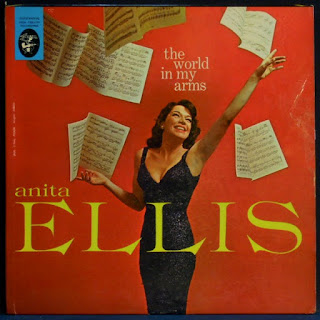 Performing live
Ellis was popular with music critics and some encouraged her to conquer her stage fright and perform before live audiences. Ellis did perform live, but with limited success. When on stage, Ellis would tremble and move around uncomfortably. After a few more tries, Ellis gave up performing live in concert venues. She did perform sporadically here and there over the years, but decided to retire in 1987.

The Ellis family was a talented one. Anita’s brother Larry Kert

, was the original Tony in the Broadway musical West Side Story