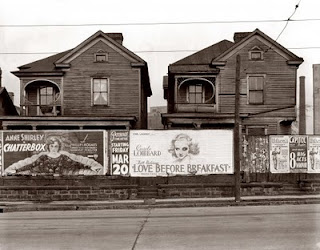 If 1935 was a good year for Carole Lombard, 1936 was the year she became a screen immortal. The three films she made in 1936 were critical and box offices successes, with My Man Godfrey

(which will be the subject of a future post) becoming one of the most famous film comedies of all time.

, a modern-day take on The Taming of the Shrew, costarring Preston Foster and Cesar Romero. On loan to Universal, Lombard's name is the only one appearing above the title. The poster art for the film features a painting of Lombard with a black eye. When the poster, plastered on a wall in an Atlanta, Georgia, town became the subject of a photograph by Walker Evans

, it only helped burnish Lombard's emergence as a screen icon.  Love Before Breakfast is far from a classic, but it is an entertaining film and it showcases Lombard's ability to carry a picture. 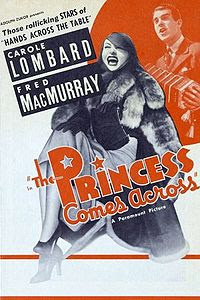 The second Lombard release is an interesting comedy, The Princess Comes Across

. It reunited her with Fred MacMurray, who she costarred with the year before in the much-heralded Hands Across the Table. The Princess Comes Across combined elements of screwball comedy with a murder mystery,  popularized by films like The Thin Man

I want to be alone
The Princess Comes Across is a romp for Lombard. She gets to imitate Greta Garbo in her characterization of princess Olga, the personality she creates to get a movie contract. The cast headlined by Lombard is ably supported by MacMurray, Alison Skipworth, Porter Hall, Sig Rumann, William Frawley, and Mischa Auer.

You can take that to the bank
Lombard was fast becoming one of Paramount Pictures's biggest and most bankable stars. During this period, she was a bigger box office draw than Bette Davis, Katherine Hepburn, Jean Harlow, Janet Gaynor, and Marlene Dietrich. In 1935, Lombard was making $3000 a week, but her fortunes would change in 1937 when she would earn $150,000 per picture, making her one of the highest paid actresses in Hollywood.
Posted by Stephen Reginald at 4:28 PM