Is Carole Lombard in love at last?

That was the title of an article that appeared in Liberty

in 1936. That was the year the world discovered what most of Hollywood already knew: Clark Gable

Lombard and Gable
The article is an interesting look back in time when the lives of Hollywood's rich and famous were followed and covered by the press as if they were royalty. The titillating, if overly long subtitle, "An Intimate Look at Hollywood's Newest Romance and--Most Discussed Question--Has the Screen's Blonde Venus Captured Clark Gable?" sets the reader up for a juicy read and it doesn't disappoint. 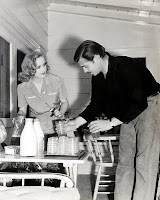 Most photographed movie star
Filled with plenty of 1930s name-dropping to satisfy die-hard movie fans, the article includes some insights into Lombard’s previous high-profile romances, including her short marriage to William Powell. It also includes the fact that Gable was still married, although separated from wife Rhea.

One interesting fact: Lombard, by 1936, had had her picture taken more than 200,000 times, putting her in such rarefied company with Marlene Dietrich and Claudette Colbert.

For the complete Liberty article, click here.
Posted by Stephen Reginald at 4:32 PM