From star to superstar: Carole Lombard Breaks Out 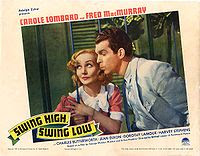 If 1936 was a watershed year for Carole Lombard

, 1937 wasn't too bad either. Lombard starred in three films released in 1937, all of which were critical and box office successes. Swing High, Swing Low

was the highest grossing film for Paramount Studios in 1937 as well as being one of the biggest box office hits of the year.

and costarred Lombard, once again, with Fred MacMurray

. Not well regarded today because it seems to be one part screwball comedy, one part melodrama, and one part musical. What seemed innovative and inventive when first released seems a bit muddled and confusing to modern viewers. Frank S. Nugent in the New York Times wrote, "Carole Lombard and Fred MacMurray skip through the formula devices of "Swing High, Swing Low" (nee "Burlesque") with their usual ease at the Paramount, raising a routine story to a routine-plus picture. The plus is extremely small, sometimes being almost invisible." Nugent ended his review by stating, "Its players really are worthy of better treatment." Still it has its moments and the Lombard/MacMurray chemistry delighted film-going audiences and most other contemporary film critics.

with a script by Ben Hecht

and direction by William A. Wellman

, the film was given the A-treatment. Selznick spared no expense when it came to the film's production, including filming it in Technicolor, still a rare event in the late 1930s, especially for comedies. Nothing Sacred has the distinction of being the only color film Lombard ever made. The story goes that some people went to see the film just to get a glimpse of Lombard's beauty in color and they weren't disappointed: she looks luminous. 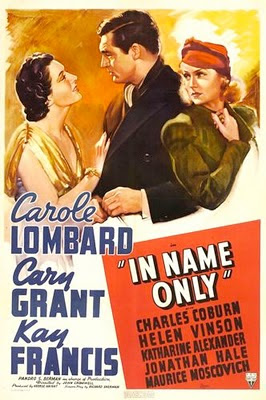 One of the ironies of Lombard's career is how quickly she began to eclipse the stars that she used to support. In 1934, Lombard appeared with Fredric March in The Eagle and the Hawk

, a film in which he received top billing. In less than three year's time, Lombard was the bigger star when they made Nothing Sacred, with her name above March's. Cary Grant, who also starred in The Eagle and the Hawk, billed above Lombard, but below March, would be billed under Lombard in In Name Only

, released in 1939. In a relatively short period, Lombard was becoming one of the biggest stars in Hollywood.

stars Lombard as a struggling fiction writer and habitual liar. MacMurray, her husband, is a straight-arrow lawyer who will only defend people he knows aren't guilty. Since they're both working hard to make ends meet, Lombard just doesn't understand how her husband can be so choosy about who he represents. To help out with the finances, Lombard secretly takes a job that doesn't require any skills, but pays a remarkable $50 for not even a full week's work! It doesn't take long for Lombard to realize that the job is mistress to the boss. Being an honorable, if a bit daffy wife, she quits almost immediately. When her boss ends up dead, with Lombard implicated in his murder, she concocts a story that helps get her acquitted of the murder and generates publicity to further her husband's law career. 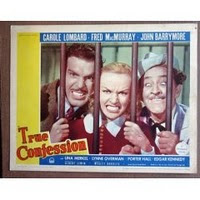 , who directed Lombard in No Man of Her Own

. Ruggles was an early champion of Lombard's, considering her an actress of great depth and potential. Unfortunately for Lombard, Ruggles didn't run the the star factory at Paramount, where she was under contract, or her star might have risen sooner.

With three hit films, both commercially and critically, it seemed as if anything Lombard touched would turn to gold. Her relationship with Clark Gable was blossoming and her film career was approaching its zenith. But for Lombard, there were still more things she wanted to accomplish as a star and as an actress. The next few years would test her talent, resolve, and resiliency.
Posted by Stephen Reginald at 8:17 PM