Cary Grant and Jeanne Crain learn that “People Will Talk”

People Will Talk (1951) is a romantic comedy written and directed by Joseph L. Mankiewicz, starring Cary Grant and Jeanne Crain. The cinematography is by Milton Krasner who won an Academy Award for Three Coins in the Fountain (1954). He also did the cinematography for A Double Life (1947), House of Strangers (1949), and All About Eve (1950).

The plot centers around Dr. Noah Praetorious (Cary Grant), an unconventional doctor who teaches at a medical school, but also runs a clinic that treats patients in a holistic manner. Dr.Praetorious’s medical practices are at odds with Professor Elwell (Hume Cronyn) who is determined to remove Praetorius from the university faculty.

In the middle of all this enters Deborah Higgins (Jeanne Crain), a single young woman who discovers she is pregnant. Deborah is determined not to let her father (Sidney Blackmer) know of her situation. She takes some desperate action that brings her to the attention of Dr. Praetorious. And then there’s Dr. Praetorious’s mysterious constant companion, Mr. Shunderson.

Will Dr. Praetorious’s career and future be ruined and sullied by those who are jealous of his accomplishments and popularity with the student body? 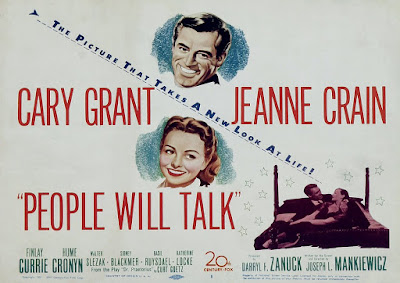 Joseph L. Mankiewicz (1929 – 1972) was an American film director, screenwriter, and producer. Mankiewicz won Academy Awards for directing and writing A Letter to Three Wives (1949), and All About Eve (1950). He is the only director to win back-to-back Academy Awards for writing and directing. Other films directed by Mankiewicz include Dragonwyck (1946), The Ghost and Mrs. Muir (1947), Julius Caesar (1953), The Barefoot Contessa (1954), and Guys and Dolls (1955). He directed the 1963 crisis-plagued production of Cleopatra which negatively affected his career as a director.

Cary Grant (1904 – 1986) was an English-born American actor who became one of the most popular leading men in film history. Grant started his career in vaudeville before heading to Hollywood. He became a superstar in the late 1930s in a series of screwball comedies including The Awful Truth (1937) with Irene Dunne. He was a memorable C. K. Dexter Haven in The Philadelphia Story (1940) opposite Katharine Hepburn and James Stewart. He received two Best Actor nominations for Penny Serenade (1941) and None but the Lonely Hearts (1944). Other classic Grant films include Gunga Din (1939), Only Angels Have Wings (1939), and Arsenic and Old Lace (1944). He made four popular films with Alfred Hitchcock: Suspicion (1941), Notorious (1946), To Catch a Thief (1955), and North by Northwest (1959). He was presented with an Honorary Oscar at the 42nd Academy Awards in 1970. 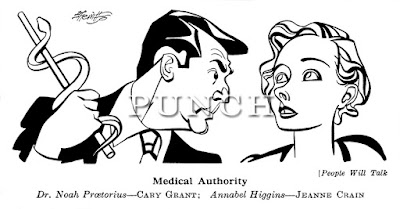 Jeanne Crain (1925 – 2003) was an American actress whose career spanned more than three decades. While still a teenager, she was asked to take a screen test with Orson Welles. He was testing for the part of Lucy Morgan in his production of The Magnificent Ambersons (1942). She didn’t get the part (Anne Baxter did), but she was on her way. She had a bit part in The Gang’s All Here (1943), but had a leading role in Home in Indiana (1944). The film was a box office hit and Crain became a favorite of film fans everywhere. She had another hit with Winged Victory (1944) and co-starred with Dana Andrews in the musical State Fair (1945). That same year, she was the “good girl” opposite Gene Tierney’s “bad girl” in Leave Her to Heaven. More good roles came her way including leads in A Letter to Three Wives (1949), The Fan (1949), and Pinky (1949). The latter won her a Best Actress Oscar nomination. She lost that year to Olivia de Havilland. Crain’s popularity continued into the 1950s but suffered when she was released from her exclusive contract with 20th Century-Fox. She continued to work in films and on television until 1975.

Below it the YouTube link to watch the film. Please us this link as there are several on the channel of inferior quality.

Topic: Discussion of "People Will Talk"


Questions for discussion:
1. What did you think of Dr. Praetorius and his medical philosophy?
2. What do you think drove Professor Elwell’s jealousy?
3. Do you think Dr. Praetorius was in love with Deborah when they married?
4. Would you like a “Mr. Shunderson” as a friend/companion?
5. Does Deborah’s plight hold up in the 21st century?

Posted by Stephen Reginald at 2:39 PM