Go “Wild” with Theodora this Saturday at Facets Night School 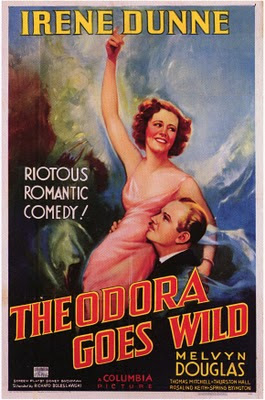 Looking for something “wild” to do this Saturday? Look no further than this week’s midnight screening of the screwball comedy classic, Theodora Goes Wild

Drama Queen
Irene Dunne took a leap of faith by starring in a comedy after she was dubbed “Queen of the Weepies” by the film trade publications in the 1930s. Having made her mark in the western epic Cimarron

(1931), Dunne carved out an enormously successful career as the heroine of a string of popular melodramas.

Comedy Rules
When she reluctantly accepted the role of Theodora Lynn in the film directed by Richard Boleslawski, Dunne was an instant comedy sensation. So popular was the film and Dunne’s performance, that she earned her second Academy Award nomination for Best Actress (Dunne’s first nomination was for her role in Cimarron). The year 1936 was a great year for the screwball comedy. That same year saw the release of Frank Capra’s

and Gregory LaCava’s My Man Godfrey

The Peyton Place of Lynnfield!
The plot surrounds Dunne, a small town woman who is the best-selling author of a scandalous romance novel. Writing under the name of Caroline Adams, her secret is safe. That is until she meets a New York illustrator played by Melvin Douglas. He decides Theodora needs to break out of her small-town existence, all the while he’s trapped in a loveless marriage to please his politically connected father. So who really needs to go wild?

Theodora Goes Wild is a highly entertaining comedy that borders on comic genius. It deserves to be in the same class as Capra’s Mr. Deeds Goes to Town and LaCava’s My Man Godfrey. It fact, it's in a class all by itself.

Posted by Stephen Reginald at 2:18 PM