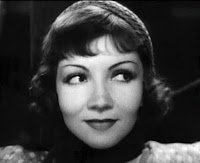 "Down to Earth Sophistication: Claudette Colbert

in Hollywood," one of the summer session offerings from Facets Film School, begins on Wednesday July 28 at 7 p.m. The instructor for the six-week course is Steve Reginald, who most recently taught "Carole Lombard: The Divine Screwball" as at Facets. For information on how to register, click here.
Highest Paid Actress in Hollywood

During the 1930s and 1940s, Colbert was one of the highest paid stars in Hollwood, making upwards of $150,000 per film. That was big money during America's Great Depression. In 1938 Colbert was the highest paid actress in Hollywood. While she was on top, she worked with some of the most talented directors in the business including, Ernst Lubitsch

, and Mitchell Leisen , to name a few. But her most famous role was as Ellie Andrews in Frank Capra's It Happened One Night

. Selznick knew that in the hands of a less talented actress the role wouldn't be believable. Not only was Colbert believable, receiving her third Academy Award nomination for Best Actress, (the film was nominated for a total of nine Oscars) Since You Went Away was also one of the biggest box office successes of 1944.
Class and Professionalism

In 1939, Colbert starred with Don Ameche in Midnight

. One of the many great films from that memorable movie year, it is too often overlooked by today's film historians. Although she was a great comic actress with impecable timing, Colbert gave some memorable dramatic performances. Three Came Home

, based on the memoir of American author Agnes Newton Keith gave the actress one of her best dramatic roles. Colbert was as true to her characterization as possible. Playing a prisoner in a Japanese prison camp during World War II, Colbert wore little makeup and allowed the right side of her face to be filmed. This may sound like nothing to the casual reader, but during most of her career, Colbert refused to be filmed from the right side, insisting it was unflattering. This often drove directors to distraction because all the blocking and camera set-ups would have to be changed to accomodate Colbert's wishes.
The Claudette Colbert Brand
What may appear to be the eccentric demands of a movie star were really the actions of a shrewd businesswoman. Colbert knew that fame and popularity were fleeting. Most of her demands had to do with protecting the Claudette Colbert "brand." She knew she was a commodity and she worked hard polishing her investment.
Colbert made over 60 films during her long career, and most are still worth watching.
Posted by Stephen Reginald at 8:55 PM