Several months ago, I had the good fortune to be part of a book club that was discussing Karen Abbott's first nonfiction book, Sin in the Second City

. That book chronicled the rise and fall of Chicago's notorious Levee District. During that book club discussion, Abbott spoke to us via telephone. The phone was passed around so everyone would have an opportunity to ask Abbott a question about her book. Toward the end of the conversation with Abbott, she revealed that she was working on a new biography of Gyspy Rose Lee, American Rose: A Nation Laid Bare: The Life and Times of Gypsy Rose Lee

. After the meeting, I contacted Abbott and asked her if I could send her some questions about her new biography. She graciously agreed and what follows are the questions I asked with her answers.


Q: Why a biography of Gypsy Rose Lee?

It’s her 100th birthday this January, so the timing is fortuitous. Her story is classic Americana with plenty of surprising detours and sordid drama along the way; I like to call it “Horatio Alger meets Tim Burton.” Here’s an awkward kid who is born into nothing, receives very little formal education, spends her entire childhood on the road, and is marginally cared for by an erratic, volatile, homicidal mother, who grows up to become a novelist, a playwright, a contributor to The New Yorker, an actress, a member of New York’s literati, and the most famous entertainer of her time. It’s really the story of America itself: the dream, the struggle, the setbacks, the ferocious drive and relentless self-invention, the ultimate triumph—and at what cost? Gypsy was a true original, as fascinating as she is timeless, and I hope American Rose

does her justice. I also hope an entirely new generation of people can appreciate how unique and genuine she was, especially in this age of manufactured celebrity. Who else but Gypsy Rose Lee would receive a telegram from Eleanor Roosevelt—Eleanor Roosevelt!—that said, “May your bare ass always be shining”?

Q: How did you first become aware of this entertainment legend?

My grandmother used to tell me stories about growing up during the Great Depression, and she once relayed a tale about a cousin who saw Gypsy Rose Lee perform (I believe in Chicago) in 1935. The cousin said, “She took a full fifteen minutes to peel off a single glove, and she was so damn good at it I would’ve gladly given her fifteen more.” So that got me thinking: who is this Gypsy Rose Lee? I spent three years researching that answer, research that involved connecting with Gypsy’s late sister, the actress June Havoc. I was the last person to interview her, and talking to her about vaudeville and Gypsy and their mother was like time traveling back to the 1920s and 1930s. I have a few audio excerpts of my interviews with June on my website and I plan to add more audio and video soon.

Q: You had a huge success with Sin in the Second City; what are your expectations for the Lee biography?

Thanks for the kind words… I think every author hopes each successive book does better than the last. I found the habitués of Gypsy’s world—the Prohibition-era gangsters, the shady politicians, the members of the Algonquin Round Table, the Broadway entrepreneurs, the odd vaudevillians (my favorite being a guy named “The Amazing Regurgitator”), the jealous and competitive stripteasers, Abbott and Costello, H.L. Mencken, FDR, the list goes on—just as intriguing as the characters in Sin in the Second City. I tried to capture a really rich and singular time in American history, and I hope people respond to that.

Q: What surprised you most when researching Lee’s life?

Good question. I’d have to say how incredibly private she was. Here’s someone who was once declared “the most popular woman in the world” and who achieved lasting and worldwide renown without letting a single person truly know her—again, what a quaint and novel concept in this day and age, when even the most private moments are packaged and peddled for public consumption. Her mystique, of course, was also literal; she became known as the stripper who kept on more than she took off, who mastered the art of the tease. Her privacy eventually became a key component of her fame. Life magazine once noted that she was “the only woman in the world with a public body and a private mind, both equally exciting.” Gypsy was a masterful magician, and her greatest trick was to belong to everyone and no one, to show everything and nothing—all at the same time. On another note entirely, I couldn’t believe what I learned about Gypsy’s mother. Anyone who’s familiar with “Mama Rose” as portrayed in Gypsy’s memoir or on Broadway will be in for a few surprises. There’s one line in American Rose that sums up their relationship perfectly:  “Theirs is a primal connection that Gypsy is incapable of severing, parallel to love and just as deep but rotten at its root. It is a swooning, funhouse version of love, love concerned with appearances rather than intent, love both deprived and depraved, love that has to glimpse its distorted reflection in the mirror in order to exist at all.”

Q: Hollywood has always been interested in Lee’s life and career; have you had any interest from Hollywood regarding your biography?

From your keyboard to Hollywood’s ears! My agent is waiting for the book to be published to take any action on that front. But as I said, the real story of Gypsy’s life is much stranger, darker, and more interesting than the one that’s been portrayed on Broadway and in the movies, so I hope someone thinks it’s time for a remake.

Gypsy was nothing if not calculating, and I think she made this decision much earlier than her time on the “Mike Douglas Show.” There’s another section in American Rose that portrays the moment Louise Hovick (Gypsy’s birth name) becomes Gypsy Rose Lee:

“In that moment Louise Hovick traded in the last piece of herself, and when she opened her mouth it was Gypsy Rose Lee who spoke. She told the manager that she could fill in for his missing lead, strip scenes and all, and then she sat before her dressing room mirror and met her creation for the very first time.”

Gypsy the person had a conflicted, tortured relationship with Gypsy Rose Lee the creation. For all of Gypsy’s mental fortitude and steely nerve, she was physically weak and oddly susceptible to illness. “The body reacted,” June Havoc told me, “because the soul protested.” Taking just one aspirin could upset her stomach, and she suffered from severe ulcers that made her vomit blood. She adored her creation because it gave her the things she’d always wanted—fame, money, security—but she loathed its limitations, either real or perceived. She lived in an exquisite trap she herself had set. 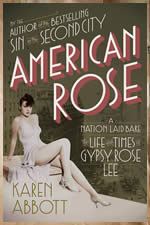 Q: I read that she and her sister June Havoc were estranged, but reconciled before Lee died of lung cancer. Did they reconcile? What was their relationship like?

When they were kids, the girls’ mother manipulated their relationship. She raised her daughters as if they were two grizzled generals preparing for war—with men, with her, with each other. They were competitive and jealous and conditioned to distrust one another, and there was some lasting damaged inflicted, I think, on both sides. June told me of one incident in particular that she never forgot. She was poor and desperate and dancing on the marathon circuit—which was a particularly grueling, brutal way to earn a living during the Depression—and asked Gypsy to introduce her to people in New York City who might help her find a legitimate acting job. Well, Gypsy sent her somewhere completely unexpected… I have a clip on my website where June talks about this a bit. But I do think they admired and cared for each other a great deal. When Gypsy was sick, June moved in with her and tended to her, and that time together went a long way toward healing any old wounds. They also bounded over how to handle their mother in her later years, which was no easy feat!

Q: What is Gypsy Rose Lee’s legacy? Does she have one?

Gypsy perfected the art of blending sex and comedy—people laughed at her routines as much as they were titillated by them. She was, by and large, an asexual person; she used sex if it suited her purposes, and those purposes seldom had to do with the expression of genuine feeling. But I think that distance from sex was necessary in order for her to find the humor in it; she was a brilliant comedian and storyteller, and happened to tell her best stories while she was taking off her clothes—or at least tricking you into thinking she would. Decades before Madonna or Lady Gaga or anyone our culture considers (or once considered) provocative, Gypsy understood how to transform desire into performance, how to capitalize on the idea that people always want most what they’ll never have.


Karen Abbott was born and raised in Philadelphia. She worked as a journalist in the city of brotherly love for several years, burned out, and moved to Atlanta to pursue writing book-length narrative nonfiction. A search for an ancestor who went missing in 1905 led her to write her New York Times bestseller Sin in the Second City, which tells the true story of two sisters who ran the world’s most famous brothel and the nationwide battle to shut them down. Her interest in Gypsy Rose Lee stems from stories her grandmother shared about the ecdysiast’s performances in the 1930s and 40s. She now lives in New York City with her husband and two African Grey parrots who do mean Ethel Merman impressions, and is at work on her next book.
Posted by Stephen Reginald at 6:00 AM