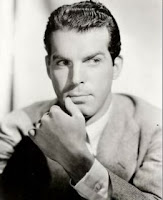 Fred MacMurray (1908-1991) was a popular movie star during Hollywood’s Golden Age. He was so popular, that in 1943, MacMurray was the highest paid movie star in the world. For most of his career, MacMurray played likeable characters in comedies, musicals, and dramas. The few times MacMurray played heavies or “bad” guys, he surprised audiences and impressed the critics. In the 1960s and 1970s, MacMurray was America’s favorite dad on TV’s My Three Sons

Music Scholar and Broadway Star
MacMurray studied music in school and was talented enough to win a full scholarship to Carroll College in Waukesha, Wisconsin. In the early 1930s, he was part of an orchestra. He eventually ended up on Broadway working alongside the likes of Sydney Greenstreet and Bob Hope. In 1934, he signed with Paramount where he was groomed for movie stardom. In 1935, MacMurray appeared in seven movies, starring opposite some of the most popular leading actresses of the day, including Claudette Colbert and Katharine Hepburn. But it was his star turn opposite Carole Lombard in Michell Leisen’s Hands Across the Table

that made him a bonafide movie star. 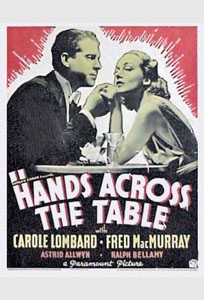 Hands Across the Table was a breakthrough for both Lombard and MacMurray. The Lombard-MacMurray on-screen chemistry was a big hit with movie audiences. Paramount was quick to capitalize on their popularity by costarring them in three more films over the next two years. Lombard and MacMurray starred in two majors successes in 1937, Swing High, Swing Low

. Had it not been for Lombard’s untimely death in 1942, there might have been more pairings.

A "Paramount" Leading Man
During the late 1930s and 1940s, Paramount cast MacMurray opposite all of it’s top female stars, including Marlene Dietrich, Paulette Goddard, and Barbara Stanwyck. MacMurray starred with Stanwyck in the Preston Sturges scripted, Leisen directed classic, Remember the Night

that would forever link the two together.

Icon Status
Cast against type as insurance salesman Walter Neff by director Billy Wilder, MacMurray showed a darker side the public had not seen before. Playing opposite Stanwyck as Phyllis Dietrichson and Edward G. Robinson as Barton Keyes, MacMurray, who was topped billed, more than held his own. The film was a hit with the public and most critics of the day. Over the years, the film’s reputation has grown. In 2007, the American Film Institute ranked Double Indemnity 29 on its list of the 100 best American Films, which was nine spots higher than when the poll was taken in 1998.

Popular Costars
MacMurray continued his winning streak throughout the 1940s. He developed a reputation around Paramount as the perfect leading man. Never overpowering the leading lady, MacMurray costarred in seven films with Colbert, four with Stanwyck as well as starring in several films with Goddard and Madeleine Carroll. MacMurray could carry a film on his own as evidenced by the successful Murder, He Says


A Turn in the Road
In 1953, his wife of 17 years passed away, leaving him with two children: 13-year old Susan and seven-year-old Robert. The following year, he married June Haver; they adopted twin daughters Katherine and Laurie in 1956. During the mid-1950s, MacMurray, like James Stewart, stayed busy starring in mostly western movies. As the 1950s came to an end, MacMurray’s career took yet another turn.


Disney Legend
In 1959, Walt Disney tapped MacMurray for a starring role in The Shaggy Dog

. The low-budget film was a monster hit for the studio, which led to the title role in The Absent-Minded Professor

. Starring alongside Jack Lemmon and Shirley MacLaine, MacMurray played wife-cheating executive Jeff D. Sheldrake. His performance was jarring to many filmgoers, who were now used to his persona as a Disney star. The Apartment would be the last film in which he would play a heel.


TV Star
Along with his new career at Disney, MacMurray entered series television in 1960 starring as widowed father Steve Douglas on My Three Sons

. One of the most popular TV series of all time, it ran for 12 years and cemented MacMurray’s place in American popular culture. MacMurray, always the shrewd businessman, arranged his TV filming schedule so he could continue making films. Between 1959-1973, MacMurray starred in seven movies for Disney, with Charley and the Angel (1973) being his last.

Well Remembered
MacMurray had a natural, comfortable acting style that was often overlooked. His comedic timing was as good as anyone’s and his dramatic performances gain new respect and appreciation with each passing year. In 1987, MacMurray was the first person honored as a Disney Legend.

A true movie legend, MacMurray earned his star on the Hollywood Walk of Fame.

Trivia: MacMurray worked with two of his My Three Sons co-stars long before the series debuted. William Frawley, who played grandfather Bub, co-starred alongside MacMurray in The Princess Comes Across

(1936). And William Demarest, who replaced the ailing Frawley as Uncle Charley, was one of Carole Lombard's prospective boyfriends in Hands Across the Table