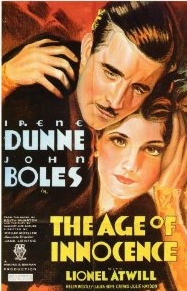 The Queen Takes Her Throne
By the mid-1930s, Irene Dunne’s career was in an upward arch. She was one of RKO Studio’s biggest and most dependable players, starring in four pictures per year on average. After her breakout performance in Cimarron (1931), Dunne starred in the classic tearjerker, Back Street (1932), based on the popular best-selling novel by Fannie Hurst. The film was a critical and box office success. Dunne went on to star in a string of popular melodramas, earning the title “Queen of the Weepies” by the motion picture press.

Manhattan Manners
In 1934, Dunne replaced Katherine Hepburn as Countess Ellen Olenska in the first talking-picture adaptation of Edith Wharton’s novel The Age of Innocence published in 1920. The period piece also starred John Boles, Dunne’s costar from Back Street. RKO borrowed Boles from Fox Studios, hoping lighting would strike twice by pairing him once again with Dunne. The film tackles the peculiar manners and mores of upper class New York Society during the latter part of the nineteenth century. It follows Wharton’s narrative fairly closely, but according to the film’s credits, it is also partially based on a play by Margaret Ayer Barnes.

Divorced Lives
The plot concerns Ellen and her attempts to seek a divorce from her European husband with whom she has become estranged. On a visit to see her American relatives, news of her planned divorce is received as well as her unexpected arrival in New York. Ellen’s family will do just about anything to avoid even the hint of scandal so they enlist the aid of lawyer and old family friend, Newland Archer (Boles) to convince the Countess that divorce would be a terrible mistake. Newland sympathizes with Ellen, but gives in to social and family pressures to convince her not to go through with the divorce.

Disengaged Engagement
Newland is engaged to be married to Ellen’s cousin, May Welland (Julia Haydon). Newland knew Ellen growing up, but barely remembers her. At Newland and May’s engagement party, Ellen tells Newland a story from their childhood to jar his memory. Almost at once, Newland is smitten with Ellen and finds himself conflicted in his relationship with May.

Newland encourages May and her family to move up the date of the wedding rather than face his feelings and potential scandal. He marries May, but his love for Ellen grows stronger. Ellen loves Newland, but she too, understands the code of conduct that runs New York society. She also loves her cousin and wouldn’t do anything to purposely hurt her.

Wharton’s Ambivalence
Edith Wharton was born into New York society before World War I. When she was 23, she married Edward (Teddy) Robbins Wharton, who was 12 years her senior. He was her equal in the society circles of the day, but they had little else in common. Wharton’s husband suffered from depression that eventually turned into mental illness that was considered incurable. When she divorced him in 1913, Wharton came under heavy criticism. Wharton understood the pressures put on both men and women during the 1870s. Although one may speculate the author’s true feelings about the sanctity of marriage and upper class propriety, Wharton never seems to agree with or condemn Newland or Ellen for their actions (or inaction). The film version does a good job interpreting Wharton’s ambivalence, which makes it rife for discussion.

Modest Success
Although not the blockbuster RKO had hoped for, The Age of Innocence did respectable business and garnered decent reviews. Once again, Dunne’s performance was praised and holds up well today. Film critic Leonard Malton in his review of the film said, “Dunne gives a luminous and touching performance.” Other members of the cast giving good performances are Haydon as May, Laura Hope Crews as May’s mother, Mrs. Welland, and Helen Westley as Granny Mignott.

In 1993, Martin Scorsese filmed a sumptuous interpretation of the Wharton classic starring Daniel Day-Lewis as Newland Archer, Michelle Pfeiffer As Ellen, and Winona Ryder as May.

Gone With the Wind Connection: It’s hard to compare the 1934 version of The Age of Innocence with the Civil War drama, GWTW, but if you take a look at the Age of Innocence’s film credits, you will see that they do share some remarkable things in common. First the cast: Laura Hope Crews would go on to screen immortality portraying Scarlett’s Aunt Pittypat. The gowns that Irene Dunne wore were designed by Walter Plunkett, the designer of all the costumes for GWTW. And last , but not least, the music was adapted by the legendary Max Steiner, who composed “Tara’s Theme.”

This post corresponds with the class Elegant and Madcap: The Incredible Versatility of Irene Dunne—Class starts November 16, 2011. Meets on Wednesdays from 7p.m. - 10 p.m. for six weeks. Classes are held at Facets Film School on Fullerton Ave. in Chicago, IL.
Posted by Stephen Reginald at 9:55 AM