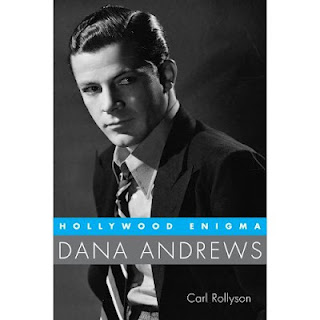 The Enigma of Dana Andrews
The first definitive biography of Dana Andrews is set for publication in September. Hollywood Enigma: Dana Andrews was written by Carl Rollyson who has biographies of Marilyn Monroe and poet Sylvia Plath (February 2013), among others, to his credit.

Understated and Underrated
Like many of Andrews’s fans know, the actor was terribly underrated even when he was at his peak in the late 1940s to early 1950s. For this new biography, Rollyson had access to journals, home movies, the Andrews family, and studio records.

Noir Legend
According to the author a study of film noir would not be complete without a review of Andrews’s work. The films Laura, Fallen Angel, and Where the Sidewalk Ends immediately come to mind when one considers some of Andrews’s best noir films.

The Man Under the Fedora
As well as Andrews wore a fedora, he was incredibly versatile and could hold his own when cast alongside other major stars like Joan Crawford and Henry Fonda in Daisy Kenyon. It’s this critic’s opinion that Andrews gives the best performance in that film. Under Otto Preminger’s tight direction, Andrews’s Dan O’Mara is a multidimensional character who is neither hero nor villain.

Dana Andrews Blogathon Coming Soon
In July I’ll be hosting a Dana Andrews blogathon. More information about that event will be forthcoming. In the meantime, you may preorder Hollywood Enigma: Dana Andrews from Amazon.com.