In 1937, Irene Dunne was at the height of her career. The year before, Dunne received a Best Actress Academy Award nomination for Theodora Goes Wild, a comedy role she was reluctant to take. Not only was that picture a critical success for Dunne, but a huge box office hit for Columbia Pictures. So it wasn’t a surprise that the next picture she would make for the studio would be another comedy.

From Stage To Screen
The Awful Truth was based on a play by Arthur Richman and brought to the screen with the aid of screenwriter Vina Delmar and Theodora Goes Wild screenwriter, Sidney Buchman, who went uncredited. Teamed with Dunne for the first time was Cary Grant. Grant was quickly becoming a top leading man in Hollywood, but his pairing with Dunne was inspired and their on-screen chemistry delighted movie-going audiences. B.R. Crisler writing in his New York Times review said, “Miss Dunne and Mr. Grant, as the couple...have fun with their roles, and the pleasure seems to be shared, on the whole, by the [Radio City] Music Hall audience.”

What Is The Awful Truth?
The plot revolves around the marital woes of Lucy (Dunne) and Jerry (Grant) Warriner. Each becomes suspicious of the other, which eventually leads them to divorce court. After the divorce, Lucy and Jerry are consumed with foiling each other’s new romantic interests. Is the awful truth the fact that Lucy and Jerry are still in love?

Get Me Out Of This Picture
Like Dunne in the previous year’s Theodora Goes Wild, Grant wasn’t too happy working on this film.
Director Leo McCarey’s working style didn’t sit well with Grant and he tried to get out of the movie, even going so far as requesting he swap roles with supporting player Ralph Bellamy! McCarey liked to get spontaneous performances out of his cast, which meant a lot of on-set improvising, which Grant found unsettling. Eventually things worked out for all concerned. Ironically, this is the movie that catapulted Grant to superstar status and is responsible for the Grant movie persona. 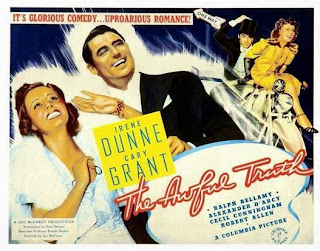 Comedy Triumph
For Dunne, The Awful Truth was a delightful experience. She loved working with both McCarey (who became a personal friend) and Grant. Professionally, it was another triumph. Once again, the critics raved about her and the film. And once again she was nominated for Best Actress by the Motion Picture Academy. If there was any doubt about Dunne’s comedy chops, they were all dispelled when the film was first released on October 21, 1937. Dunne and Grant would go on to star in two other popular films: the comedy My Favorite Wife (1940) and the melodrama Penny Serenade (1941).

Award Winner
The Awful Truth was nominated for six Academy Awards, including Best Picture, Best Director, Best Screenplay, and Best Supporting Actor. McCarey won the only Oscar for his direction. 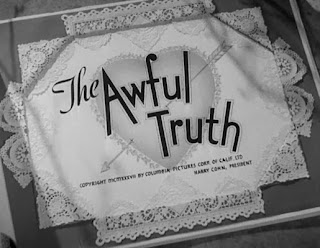 Backstory: Mr. Smith, the Warriner’s dog in The Awful Truth, was more famous as Asta, the pet of Nick and Nora Charles (William Powell and Myrna Loy) from The Thin Man movies. This talented pet’s real name was Skippy.

Come early and enjoy delicious food and beverages at Overflow Coffee Bar. Mention the Film Club and get 50% off a beverage with the purchase of any food item. Stay on top of all the Chicago Film Club screenings by joining their Meetup page. It’s free to join!

Posted by Stephen Reginald at 4:12 PM