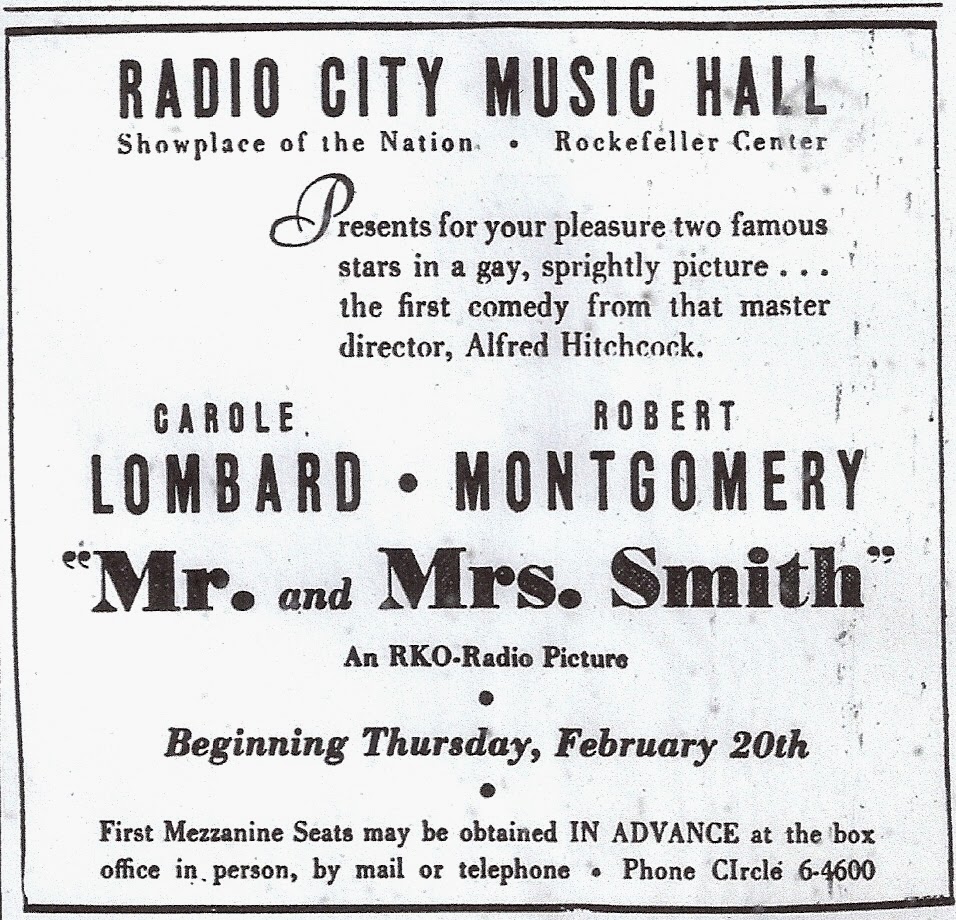 Yes, a Hitchcock Screwball Comedy
In 1940, Alfred Hitchcock’s third American film, Mr. and Mrs. Smith, was a screwball comedy. Yes, that’s right a screwball comedy. And it starred Carole Lombard, who had recently been proclaimed the “Screwball Girl” in a Life magazine profile. Few classic movie fans are familiar with this Hitchcock comedy, even though it was a critical and commercial hit, making its debut at New York’s Radio City Music Hall.

Typically screwball
The plot is typical for a screwball comedy. Ann (Lombard) and David (Robert Montgomery) Smith, discover that through a technicality their marriage isn’t legal. After David admits to his wife that if he had it to do all over again, he wouldn’t get married, Ann decides that she doesn’t want to be married either. What follows is a series of events in which each spouse tries to make the other jealous. Ann starts dating David’s law partner Jeff Custer (Gene Raymond) and David takes a room at his club and starts to hang out with a philandering Chuck Bensen (Jack Carson), which leads to some of the film’s funniest moments.

His kind of actress
Alfred Hitchcock loved Carole Lombard. She was his type of actress: beautiful, smart, earthy, and blonde. The Hitchcock family rented Lombard’s house after she and Clark Gable were married in 1939. The Hitchcock’s and the Gable’s became fast friends and it was inevitable that the director and actress would work together. Unfortunately, Lombard would make one movie after Mr. and Mrs. Smith, dying tragically in a plane crash the next year, after a successful war bond drive during World War II. 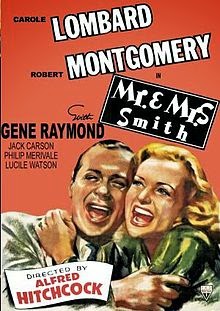 The script written by Oscar winner, Norman Krasna (Hands Across the Table, Bachelor Mother, It Started with Eve, Princess O’Rourke) is quite good and Lombard and Montgomery have great on-screen chemistry and deliver good performances. Raymond is perfect as Montgomery’s strait-laced college chum and partner. The film is peppered with some great character actors like Carson, Lucile Watson, Charles Halton, Esther Dale, and Betty Compson.

Mr. and Mrs. Smith proved that Hitchcock, the master of suspense, could be successful in any genre he put his mind to.


Backstory: Mr. and Mrs. Smith opened on February 20, 1941 at New York’s Radio City Music Hall. Hitchcock and Lombard had hoped to get Cary Grant to costar, but he was not available. Some Hitchcock critics say that Mr. and Mrs. Smith was a critical and financial flop. This is not true. Audiences were delighted to see Lombard in a comedy after starring in two heavy dramas (Vigil in Night and They Knew What They Wanted). Hitchcock’s first three American films were all solid commercial successes.

Posted by Stephen Reginald at 9:01 AM