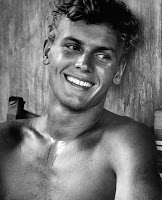 Tab Hunter (born Arthur Andrew Kelm) was a teen idol during the mid-1950s. Hunter starred in dozens of movies—most of which are forgettable—but his popularity with teenage girls was phenomenal, making him a top box office attraction. He even scored a number 1 hit record—“Young Love”—that knocked Elvis out of the top spot. So popular was Hunter as a singer that Jack Warner at Warner Bros. founded Warner Records specifically to promote their hot property. The documentary Tab Hunter Confidential, based on his autobiography, tells his story.

Hunter was born in New York City to Gertrude Gelien and Charles Kelm. Hunter’s dad was abusive to his mother. His parents eventually divorced with his mother taking her two sons (Hunter had an older brother named Walter) and moving to California.  Even as a teenager, Hunter’s good looks got noticed. He got so much attention from the opposite sex in school that he joined the Coast Guard at 15, lying about his age, to escape. He was eventually discharged when his real age was revealed. Now a California boy, Hunter was signed by agent Henry Wilson in the early 1950s and eventually landed a long-term contract with Warner Bros. Wilson was also the agent of Hollywood heartthrobs Guy Madison, Rock Hudson, and Rory Calhoun. Hunter appeared in several forgettable films but caught the public’s attention as a Marine having an affair with a married woman in the World War II drama Battle Cry (1955), one of the biggest films of that year. He was quickly given male lead status in films like The Burning Hills and The Girl He Left Behind (both 1956 and both co-starring Natalie Wood). During this time, Hunter was appearing on television, performing in the Hallmark Hall of Fame production of Hans Brinker and the Silver Skates (1958) and Meet Me in St. Louis (1959). It’s hard for us to imagine today how popular Hunter was. Not only was he a movie star, but he was a recording artist who sold millions of records. The publicity machine said Hunter was “6" of rugged manhood who stirred the heart of every woman” and he was called “The Sigh Guy” which was based on the reaction of his female fans upon seeing him. 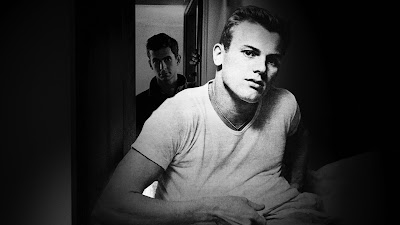 Like many Hollywood idols, Hunter had a secret. He was a homosexual (he recounts that the term gay was never used in his day). Hunter says his homosexuality was the worst kept secret in Hollywood, but the studio publicity machine at Warners kept the rumors at bay by pairing him on dates with young female stars like Debbie Reynolds and Wood. Hunter details his relationships with actor Tony Perkins and champion figure skater Ronnie Roberston (Hunter himself was a competitive figure skater in his teens), as well as with Etchika Choureau, his French costar in Lafayette Escadrille (1958). 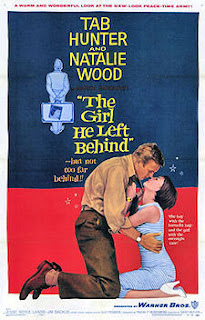 The documentary presents Hunter, a naturally shy and modest man, front and center. He details his struggles with his hidden private life. It also features input and commentary on the times by Reynolds, Robert Wagner, Connie Stevens, George Takei, and Clint Eastwood. Also in the mix are film critic Rex Reed, gossip columnist Rona Barrett and many others. These friends and costars help put 1950s Hollywood and the old studio system and the power they waged over their contract players into context. In spite of all these conflicts, Hunter was dedicated to his work and honoring his contract. Unfortunately, he felt that some of his best work was on loan from his home studio. Hunter points to Gunman’s Walk (1958) where he was cast against type as a murderer and That Kind of Woman (1959) opposite Sophia Loren. Hunter disillusioned with the roles Warners was offering him decided to buy out his contract and work as a freelance artist. This was the beginning of the end. Hunter said, “leaving Warner Bros. was career suicide.” Without the backing of a major studio, Hunter found it difficult to obtain lead roles in major Hollywood productions. This and the fact that Hunter’s All-American image was losing its luster with the public. His fall was quick. He went from co-starring with Gary Cooper and Rita Hayworth in They Came to Condura (1959) to flying on a magic carpet in The Golden Arrow (1962), an Italian production that dubbed someone else’s voice for his in English?! He received third billing (under Fabian and Shelley Fabares) in the surfer movie Ride the Wild Surf (1964), and perhaps the worst of this period, The Birds Do It (1966) playing second banana to Soup Sales. 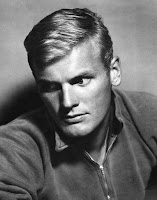 In the late 1960s, Hunter worked steadily in dinner theater. In the 1970s, Hunter guest-starred on television appearing in shows like The Love Boat, Police Woman, Hawaii Five-O, and Charlie’s Angels. His career took a wild turn when John Waters cast him as Todd Tomorrow in Polyester (1981) opposite transvestite drag queen Divine. The attention was short-lived; no major movie roles followed.

Hunter’s last film role was in  Dark Horse (1992), based on his original story about Allison Mills, a girl crippled in an accident with her favorite horse, Jet, also crippled. Allison learns to rise above her disability with the help of Jet who eventually runs again.

The above could be Hunter’s story. Introduced to horses and horseback riding by his older brother, Hunter was most at home caring for and riding horses in competition. He’s now retired and living with his long-time partner, film producer Allan Glaser, in Santa Barbara, California. According to Glaser, Hunter’s main joy in life is taking care of his horse Harlow, grooming her and cleaning her stall every day.