Screening of "Where the Sidewalk Ends" at Daystar Center November 18

Where the Sidewalk Ends (1950) reunites the star’s of Laura (1944), Dana Andrews and Gene Tierney in another classic film noir directed by Otto Preminger. The plot concerns a rogue cop, Mark Dixon (Andrews) who goes a little too far when pursuing some crooks and hoodlums. When he accidentally kills one of the suspects involved with gangster Steve Scalise (Gary Merrill), Dixon’s life begins to spiral out of control. Things become even more complicated when Dixon begins to fall in love with Morgan Taylor-Paine (Tierney) the widow of the suspect he killed. Will Dixon be able to solve the case without implicating himself? The film boast a superior supporting cast including, Karl Malden, Ruth Donnelly, and Craig Stevens. 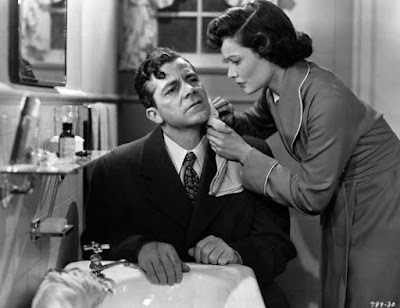 Stephen Reginald is a freelance writer and editor. He has worked at various positions within the publishing industry for over 25 years. Most recently he was executive editor for McGraw-Hill’s The Learning Group Division. A long-time amateur student of film, Reginald hosts “Chicago Film Club,” a monthly movie event held in the South Loop, for the past two years. Reginald has also taught several adult education film classes at Facets Film School, Chicago.
Posted by Stephen Reginald at 6:29 PM