Saturday the 28th was the third day—second full day—of the TCM Film Festival. And what a tough beginning to the day (To borrow a movie quote, “were there enough days in that sentence?”). There were four movies that I would have loved to have seen, but I had to choose one.

His Girl Friday (1940) is a favorite of mine and it would have been great to see it with an audience in the Chinese Theatre and who doesn’t love the teaming of Cary Grant and Rosalind Russell? Kiss Me Deadly (1955) is a movie that I’ve never understood its appeal; this was an easy pass for me. Love Finds Andy Hardy (1938) would have been great fun with Mickey Rooney, Lana Turner and Judy Garland before they became screen legends. And another favorite, A Letter to Three Wives (1949) I would have really loved to have seen with an audience. In my opinion this Joseph L. Mankiewicz classic (he won Oscars for his writing and direction) holds up better than All About Eve, the movie he made the next year. I decided to go to the Egyptian Theatre to see The Ox-Bow Incident (1943). This modest western was a favorite of the film’s star, Henry Fonda. The film is a tragic example of what happens when men take the law into their own hands. When word comes to town that a man has been shot dead, a group of men decide to find and hang the murderer. The supporting cast is excellent. It includes Dana Andrews, Anthony Quinn, Francis Ford, Jane Darwell, Harry Davenport, Harry Morgan, and William Eythe. Andrews is a standout as one of the victims at the hands of the posse. Fonda delivers a solid performance as a member of the posse who doesn’t go along with the mob. William Wellman, who also counted this as among his favorites, directed the film. Scott Eyman who is the author of the recent biography Hank and Jim: The Fifty-Year Friendship of Henry Fonda and James Stewart, introduced the movie. The movie was shown in a digital format that looked flawless. 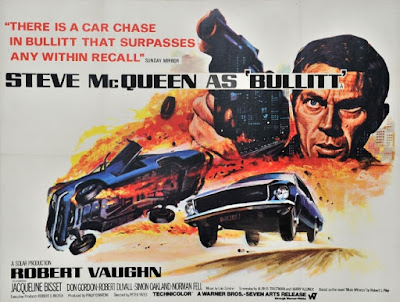 The next choice at 11:30 a.m. was pretty easy. Bullitt (1968) starring Steve McQueen was a film that I had never seen from beginning to end. I’d seen clips of the famous car chase, but again, I never sat down to watch the whole film. The IMAX screen in the Chinese Theatre was the perfect venue in which to watch this movie. When the car chase happened, it was incredible and it holds up amazingly well. Actress Jacqueline Bisset was scheduled to appear at the screening, but she canceled at the last minute due to a family emergency. Eddie Muller, who was set to interview Bisset, expressed his disappointment at this turn of events, but managed to pull it together and deliver a good introduction. 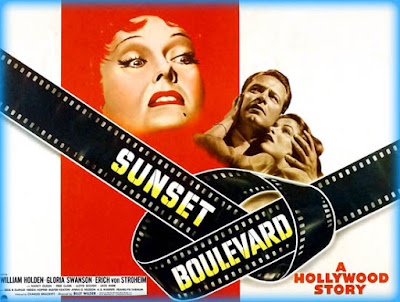 My next film was another easy choice for me. I chose Sunset Boulevard (1950) because it’s just an amazing piece of filmmaking, directed by the legendary Billy Wilder. The movie takes a look at Hollywood in a most unglamorous light, which was a big risk at the time of its release. The Studio System was still in effect and many in Hollywood, including Louis B. Mayer, hated it. The film also features a great early performance by William Holden as Joe Gillis and was his first collaborative work with director Wilder. Gloria Swanson also delivers an amazing performance as silent film star Norma Desmond, winning an Academy Award nomination for Best Actress in the process. She lost out to Judy Holiday. On the big screen in the Chinese, Sunset Boulevard looked just perfect…and Sunset Boulevard is an almost perfect movie. Nancy Olson who starred as Betty in the film was interviewed by Ben Mankiewicz before the screening.


Another relatively easy pick for me came up at 6:30 p.m. The World of Suzie Wong (1960) starring William Holden and Nancy Kwan in her film debut. I had never seen this movie, being too young to have seen it in the movies (I was only three at the time) and when it finally arrived on network TV, I wasn’t allowed to watch it (once again, I was too young as far as my parents were concerned). By today’s standards, the movie is fairly tame, but it does deal with serious issues of race, sex, discrimination, and marriage. And it does so in a way that I found interesting and not as dated as I had been led to believe. Before the film, Kwan was interviewed by film historian Donald Bogle. She talked about her early life and how she entered acting completely by accident. Kwan was studying ballet in London and was discovered in her native Hong Kong when she visited the studio where they were testing for the role of Suzie Wong. Kwan wanted the opportunity to see some of her favorite actresses in person. She had no intention of auditioning herself. I enjoyed listening to Kwan talk about the movie, working with Holden (a good experience for her), and how her movie career wasn’t sustainable due to too few roles for Asian actresses. 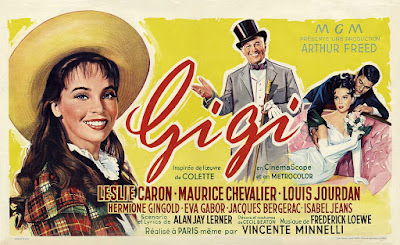 The last movie of the night for me was Gigi (1958). I though it would be great to see this film on a big screen because every frame looks like a painting. I was not disappointed. The digital restoration was beautiful. The music by Lerner and Lowe is memorable, as is the cast: Maurice Chevalier, Louis Jordan, Hermione Gingold, and Leslie Caron as Gigi. Caron was perfect in the role; it’s hard to imagine anyone else playing her. The tuneful classic was the perfect end to the third day of the festival.

Looking ahead to day four of the festival. Some good choices in the morning: Once Upon a Time in The West (1968), The Black Stallion (1979), Woman of the Year (1942), Tunes of Glory (1960). What movie will I choose? What movie would you pick for your first movie on the last (sniff) day of the festival?

Posted by Stephen Reginald at 7:49 AM