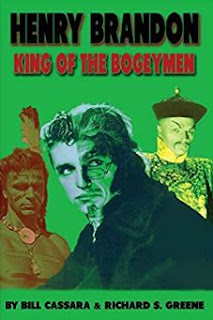 When I was younger they used to show Babes in Toyland (1934)—also known as March of the Wooden Soldiers—on television in New York during the Thanksgiving holiday season. I always looked forward to watching it with my older brother. Henry Brandon (billed as Henry Kleinbach), like Margaret Hamilton in The Wizard of Oz (1939), scared me to death as a child. Hamilton had the flying monkeys, Brandon had the boogeymen; the stuff nightmares are made of.

Authors Bill Cassara and Richard S. Greene have compiled a biography of the character actor that highlights his roles on stage and in film, rather than presenting a full-blown record of the details of his birth, family life, schooling, and so on. That doesn’t mean we don’t learn some facts about Brandon’s life apart from his career. We learn that he was educated at Stamford University, was fluent in German, and had a distinguished military record during World War II.

The bulk of the biography details Brandon’s acting careering, highlighting his signature roles: The evil Barnaby in Babes in Toyland and Scar in The Searchers (1955). Brandon’s character acting career was quite prolific, but unlike Walter Brennan, most people didn’t know Brandon by name. Brandon carved out successful career in Hollywood as a character actor without—unlike Brennan—being under contract to a major or minor Hollywood studio. Brandon’s talent for portraying just about any ethnic character pretty much guaranteed his constant employment.

Henry Brandon: King of the Boogeymen is generously illustrated with photographs of the actor in his various film roles, as well as casual photographs of Brandon with his many friends and colleagues.

If you’re interested in classic Hollywood and learning about a talented journeyman character actor, you’ll enjoy this biography.