The Woman in the Window (1944) is an American film noir directed by Fritz Lang, produced by Nunnally Johnson, and starring Edward G. Robinson, Joan Bennett, Raymond Massey, and Dan Duryea.

The plot centers on a mild-mannered college professor Richard Wanley (Robinson) who meets Alice Reed, (Bennett) while staring at a painting in an art gallery window. He soon realizes that the woman was the model for the painting. What started out as an innocent night out for a few drinks turns into a night of murder and blackmail.

How will  Professor Wanley and Alice get out of the mess they’ve gotten themselves into?


Fritz Lang (1890 – 1976) was an Austrian-German-American director. Lang is the director of the silent film classic Metropolis (1927). After serving in World War I, Lang worked for a time as an actor in the theater and then worked as a writer at Decla Film in Berlin. Lang’s first talking picture was M (1931) a story about a child murderer. Due to his growing renown, Joseph Goebbels offered him the position of head of the German film studio UFA in 1933. Lang emigrated to Paris and then to the United States in 1936. Lang worked for all the major studios, making twenty-three feature films in the United States. Some of Lang’s films include Scarlet Street (1945), The Big Heat (1953), and While the City Sleeps (1956).

Nunnally Johnson (1897 – 1977) was a journalist, screenwriter, producer, and director. He worked for many years as a writer at 20th Century-Fox before he co-founded International Pictures in 1943 with William Goetz. Johnson was nominated for an Academy Award for Best Screenplay in 1940 for The Grapes of Wrath. Johnson wrote, produced, and directed The Man in the Gray Flannel Suit (1956) and The Three Faces of Eve (1957). As a writer-producer, he is responsible for The Gunfighter (1950), My Cousin Rachel (1952), and How to Marry a Millionaire (1953). Johnson’s last credited screenplay was for The Dirty Dozen (1967). 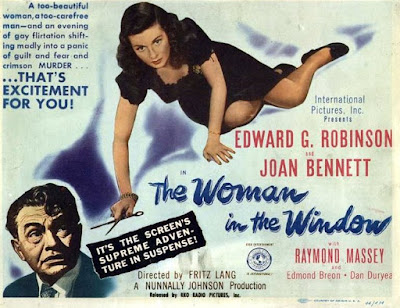 
Questions for discussion:
1. Noir or not? Does this film fit your idea of film noir?
2. Did you notice any noir visual clues?
3. Was Edward G. Robinson credible as a middle-aged college professor?
4. Any significance to the name Wanely? Why do you think professor Wanely decided to read “The Song of Solomon.”
5. Joan Bennett wasn’t your typical film noir “dame.” What sets her apart from some other femme fatales in other films noir? Were you curious about Bennett’s profession?
6. Fritz Lang is considered one of the best directors of film noir. From what you know about Lang, do you agree? What makes his style unique?
7. Did you like the ending? Was it a surprise or expected?

Trivia: Look for Robert Blake at the beginning of the film. He plays Robinson’s young son. Blake wasn't credited in the movie.

Posted by Stephen Reginald at 7:18 PM