“The Furies,” the first western from legendary director Anthony Mann

The Furies (1950) is an American western directed by Anthony Mann, produced by Hal Wallis, and starring Barbara Stanwyck, Wendell Corey, and Walter Huston in his final film performance.

Director Anthony Mann got his start directing films noir and The Furies, his first western, has its noir moments. The stark desert landscape is brought to life by the beautiful cinematography of Victor Milner, a ten-time Academy Award nominee. He won his only Oscar for his work on Cleopatra (1934). 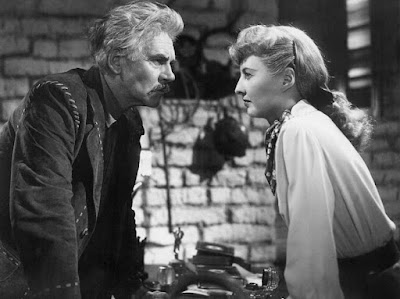 The plot centers around T. C. (Walter Huston) and Vance Jeffords (Barbara Stanwyck), widowed father and daughter respectively who clash over how to run their vast cattle ranch empire. Like Gene Tierney in Leave Her to Heaven (1945), Stanwyck’s character has some daddy issues. T. C. wants to leave the cattle ranch to Vance who has a better head for business than his son his Clay (John Bromfield) under the condition that he approves of the man she is to marry. Vance is in love with Juan Herrera (Gilbert Roland), but she knows her father will never approve that relationship. Vance eventually falls in love with businessman Rip Darrow, but her father disapproves and buys Rip off. The trouble really begins when T. C. declares that he is to marry Flo Burnett (Judith Anderson) and Vance sees her place in the eyes of her father diminishing.

Will father and daughter be able to resolve their differences or will their bitterness destroy them both?

Anthony Mann (1906 – 1967) was an American director. Mann got his start in film working as a talent scout for David O. Selznick. He later became an assistant director, assisting Preston Sturges on Sullivan’s Travels (1941). Mann went on to direct a variety of low-budget, but successful films at Republic, RKO, and Eagle-Lion studios. The Furies was Mann’s first A picture. After The Furies, Mann went on to direct many successful westerns including Winchester ’73 (1950), Devil’s Doorway (1950), Bend of the River (1952), and The Naked Spur (1953).

Below is the link to the movie on YouTube. Please use this link; there are several prints uploaded to the channel, but this one is from Criterion and the quality is excellent.

Questions for discussion:
1. Is this film more noir than western or a mixture of both or something else completely?
2. What did you make of the father-daughter relationship between Huston and Stanwyck’s characters?
3. Were you surprised by the relationship between Stanwyck and Juan Herrera (Gilbert Roland)?
4. Some critics have noted that the film has allusions to Greek tragedy. Do you see those allusions?
5. Did you like the ending? Was it a surprise or expected?

Posted by Stephen Reginald at 4:36 PM