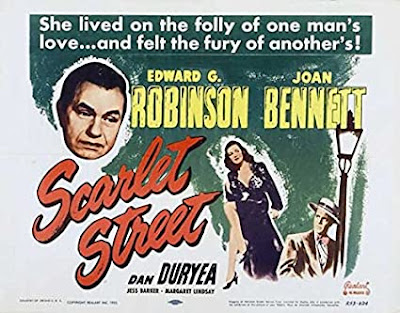 With the critical and box office success of The Woman in the Window (1944), director Lang once again directed Robinson, Bennett, and Duryea in another film noir thinking lighting would strike twice and it did.

The plot revolves around Christopher “Chris” Cross (Robinson), a shy and reserved cashier for a retail store. In his spare time, he paints to help him forget his dull life and loveless marriage with Adele (Rosalind Ivan). Walking through Greenwich Village he witnesses Kitty March (Bennett) being roughed up by Johnny Prince (Duryea) and proceeds to knock Johnny out with his umbrella. Chris is enamored with Kitty and the two go out for drinks. While together, Chris is somewhat vague about his profession and his financial situation. Based on the way Chris talks about art, Kitty suspects he’s a rich and famous artist. When Kitty tells Johnny about her encounter, Johnny cooks up a plan to swindle Chris of his “fortune.”


If The Woman in the Window was all a dream, Scarlet Street is a nightmare. Much darker than its predecessor but with similar ironic twists and turns to keep you guessing till the end.

Scarlet Street was a nominee for Best Feature Film at the 1946 Venice Film Festival.