10 Things You May Not Know About Olivia de Havilland

Olivia de Havilland (1916 – 2020) was a two-time Academy Award Winner for Best Actress. She was the last remaining major movie star from Hollywood’s Golden Age when she passed away at her home in Paris, France, at 104.

1. De Havilland was born in Tokyo, Japan. Her father was an English professor at the Imperial University in Tokyo City at the time of her birth. Her parents were both citizens of the United Kingdom so she became an automatic citizen.

2. She took ballet lessons at four and piano lessons at five and could read before she was six.

3. De Havilland originally planned on becoming a schoolteacher, focusing on English and speech; she received a scholarship to Mills College in Oakland, CA for this pursuit.

4. She was reluctant to become a film actress but was convinced by director Max Reinhardt (who in some respect discovered her) and producer Henry Blake to sign a contract in 1934 with Warner Bros. Her starting salary was $200 a week, an amazing sum for an 18-year-old actress.

5. At age nineteen, de Havilland starred opposite another newcomer, Errol Flynn in Captain Blood, released in 1935. The pairing of the two stars was so popular with the public that they made a total of eight films together.

6. De Havilland was cast as Maid Marian opposite Errol Flynn in the Technicolor classic The Adventures of Robin Hood (1938). It was one of the most popular adventure films of the late 1930s. 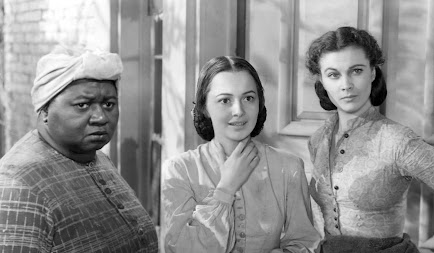 7. She managed to convince Warner Bros Studio head Jack Warner (with the help of his wife) to be loaned to David O. Selznick to play Melanie Hamilton in Gone with the Wind (1939). She would receive the first of five Academy Award nominations for her role. The New York Times wrote as Melanie de Havilland’s performance “is a gracious, dignified, tender gem of characterization.”

8. In 1943 she sued Warner Bros. after her contract was up but the studio contended that she owed them an additional six months for the times she had been suspended for turning down certain roles. She won her case (known today as the De Havilland Law) but Warner Bros. blacklisted de Havilland which resulted in her not working for almost two years.

9. In 1945, de Havilland began filming To Each His Own. She played an unwed mother who gives her child up for adoption. In the film, she ages almost 30 years. She won her first Best Actress Oscar for her performance, marking a remarkable comeback.

10. She was appointed a Chevaliler of the Legion d’honneur, the highest decoration in France in 2010 by President Nicolas Sarkozy, and was appointed Dame of the Order of the British Empire in 2017 by Queen Elizabeth II.

Posted by Stephen Reginald at 2:33 PM

Email ThisBlogThis!Share to TwitterShare to FacebookShare to Pinterest
Labels: 10 Things You May Not Know About Olivia de Havilland, Academy Award, Classic Movie Man, Errol Flynn, Gone with the Wind, Olivia de Havilland, Oscar, Stephen Reginald, The Snake Pit, To Each His Own