The Catered Affair (1956) is an American drama directed by Richard Brooks and starring Bette Davis, Ernest Borgnine, Debbie Reynolds, Barry Fitzgerald, and Rod Tayor. The musical score is by Andre Previn and the cinematography is by John Alton. 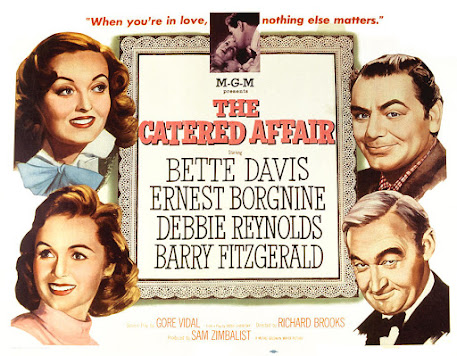 Agnes Hurley (Davis), a Bronx housewife married to cab drive Tom Hurley (Borgnine) wants her only daughter to have the wedding she never had. The problem is, she and her husband are of humble means and really can’t afford one. Their daughter Jane (Reynolds) and her fiance Ralph Halloran (Taylor) don’t want a big wedding, in part due to all the complications and conflicts they can create.

Agnes persists with the big wedding plans and Jane, Tom, and Ralph reluctantly give in, not realizing how this decision will impact family and friends as the big day approaches.

Debbie Reynolds (1932 – 2016) was an American singer and movie actress. Reynolds made her film debut in 1950 in Three Little Words. Two years later she had her breakout role as Kathy Seldon in Singin’ in the Rain (1952). She appeared in many films during the 1950s including The Affairs of Dobie Gillis (1953), Susan Slept Here (1954), and Bundle of Joy (1956) co-starring her then-husband Eddie Fisher. In the 1960s she starred in How the West Was Won (1962), The Unsinkable Molly Brown (1964), The Singing Nun (1966), and Divorce American Style (1967). In 1973, she made her Broadway debut in a revival of the musical Irene. For her role in The Catered Affair, she was voted the Best Supporting Actress of the year by the National Board of Review.

Posted by Stephen Reginald at 3:18 PM