William Holden is a prisoner in “Stalag 17”

Stalag 17 (1953) is an American comedy-drama directed by Billy Wilder set in a German prisoner of war camp during World War II. The film is based on the Broadway play of the same name written by Donald Bevan and Edmund Trzcinski. Bevan and Trzcinski based the play on their experiences as prisoners in Stalag 17B in Austria. The film stars William Holden, Don Taylor, and Otto Preminger.

The camp has prisoners from several nations including many Americans. At the beginning of the film, two Americans try to escape through a tunnel but are shot by guards waiting for them. It becomes obvious to the other prisoners that there is a traitor in their midst. The men suspect that J. J. Sefton (Holden), a man who trades with the Germans for food, blankets, and other luxuries is the one betraying their plans to the Germans. Things get more complicated when another prisoner, Lieutenant Jame Dunbar (Taylor) arrives at the camp.

After being beaten by the other prisoners who suspect he is the traitor, Sefton sets out to discover who the real culprit is.

Billy Wilder (1906 - 2002) was an Austrian-born American film director, screenwriter, and producer. He won six Academy Awards for his writing and direction and was nominated twenty-one times over a career that spanned five decades. Wilder started his career as a writer, penning the screenplays for Ninotchka (1939), Ball of Fire (1942), Double Indemnity (1945), The Lost Weekend (1946), Sunset Boulevard  (1951), Sabrina (1955), Some Like it Hot (1960), and The Apartment (1961). As a director, he won Academy Awards for directing The Lost Weekend (1946) and The Apartment (1961). Wilder directed fourteen different actors in Oscar-nominated roles. He is considered one of the most versatile directors from Hollywood’s Classical period.

William Holden (1918 - 1981) was an American actor and major movie star. He was one of the most bankable stars of the 1950s. Holden starred in some of the most popular and beloved films of all time including Sunset Boulevard, Sabrina, Picnic (1955), The Bridge on the River Kwai (1957), and Stalag 17 for which he won the Academy Award for Best Actor. Holden became a star with his very first role in Golden Boy (1939). He had lead roles in other popular films like Our Town (1940), and  I Wanted Wings (1941). World War II interrupted his career. Holden was a first lieutenant in the United States Army Air Force. After the war, he made some popular but forgettable films. It wasn’t after he collaborated with director Wilder on Sunset Boulevard that Holden’s popularity and stature in Hollywood grew to superstar status. 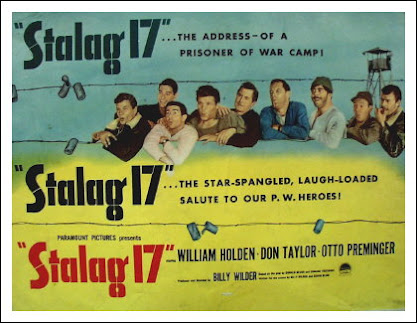 Others in the cast include Don Taylor, best know for playing Elizabeth Taylor’s husband in Father of the Bride (1950) and its sequel Father’s Little Dividend (1951), and producer-director Otto Preminger. Preminger directed many popular films including Laura (1944), Forever Amber (1947), The Man with the Golden Arm (1955), and Anatomy of a Murder (1959).

To join the discussion on March 30, 2021, at 6:30 p.m. Central Time, click here. Once you RSVP, you will receive an email with an invitation and link to the meeting on Zoom.

Posted by Stephen Reginald at 4:44 PM