The Paradine Case (1947) is an American courtroom drama directed by Alfred Hitchcock and starring Gregory Peck, Ann Todd, Charles Laughton, Charles Coburn, and Ethel Barrymore. The film introduced Alida Valli (billed as Valli on screen) and Louis Jourdan. The film was the last movie Hitchcock directed while under contract to David O. Selznick.

In London, Anna Paradine (Valli), a beautiful young Italian woman is accused of murdering her older, blind husband. The fact that her husband, a wealthy retired colonel cast suspicion on the enigmatic Anna. Anna’s personal lawyer, Sir Simon Flaquer (Coburn), hires Anthony Keane (Peck), a young, successful lawyer to defend her. Keane has been happily married to Gay (Todd) but he is instantly fascinated by his new client.

Is Anna a murderer? Did she poison her husband on her own or did someone else do it? Was it the colonel’s valet (Jourdan)? Will Keane’s infatuation with Anna keep him from finding the truth and destroy his marriage in the process?

Gregory Peck (1916 – 2002) was one of the biggest stars in Hollywood. He was nominated three times for Best Actor finally winning for his role as Atticus Finch in To Kill a Mockingbird (1962). Peck had non-exclusive contracts with David O. Selznick and Twentieth Century-Fox which gave him great flexibility in the roles he chose to play. Peck first gained prominence in The Keys of the Kingdom (1944) and he remained a major movie star through the 1960s. Some of his iconic films include Spellbound (1944), Captain Horatio Hornblower (1951), Roman Holiday (1953), and The Guns of Navarone (1961).

Ann Todd (1907 - 1993) was an English actress and singer. She started out on the London stage but ended up appearing in films, becoming a star opposite James Mason in The Seventh Veil (1945). Due to the success of that film, she was signed by producer David O. Selznick. It was reported to be the most “lucrative”film contract signed by an English actress. However, she found limited success in America. Todd was married three times. Her third husband was to film director David Lean. Together they collaborated on three films produced in England.

Ethel Barrymore (1879 - 1959) was an American stage and film actress and part of the famous Barrymore family of actors. Her equally famous brothers were Lionel and John Barrymore. Barrymore got her start on the stage and she was among its brightest stars for many years. Barrymore also had a successful career on the other side of the Atlantic in London where she starred in Peter the Great. She achieved one of her biggest Broadway successes in W. Somerset Maugham’s comedy, The Constant Wife (1926). Barrymore was a popular character actress in film during the 1940s. She won the Academy Award for Best Supporting Actress for her performance in None but the Lonely Heart (1944) opposite Cary Grant who played her son. Other film roles include The Spiral Staircase (1946), The Paradine Case (1947), and Pinky (1949).

Alida Valli (1921 - 2006) was an Italian actress who made films in Europe and the United States. She came to America under contract to David O. Selznick who considered her another Ingrid Bergman. Introduced as “Valli” in Alfred Hitchcock’ The Paradine Case, she never lived up to the promise Selznick had for her. Her next two films The Miracle of the Bells (1948) co-starring Fred MacMurray and Frank Sinatra and Walk Softly Stranger (1950) co-starring Joseph Cotten were box office failures. The latter film was completed in 1948 but its release was held up for two years with the hope that it would capitalize on the popularity of The Third Man (1949). Valli had much greater success in Europe where she starred in films until 2002.

Louis Jourdan (1921 - 2015) was a French film and television actor. Jourdan worked on the stage in Europe and even began working in films as early as 1939, but his film work was interrupted due to World War II. After the war, Jourdan was brought to Hollywood by producer David O. Selznick. His first film in Hollowood was Alfred Hitchcock’s The Paradine Case (1947). The next year he made Letter from an Unknown Woman, one of his most famous roles during his long career. Jourdan made movies in Europe and Hollywood and starred on Broadway in The Immoralist in 1954 co-starring with Geraldine Page and James Dean. Jourdan’s most famous and successful American film was Gigi (1958). The film cos-starred Leslie Caron and Maurice Chevalier and won nine Academy Awards, including Best Picture. 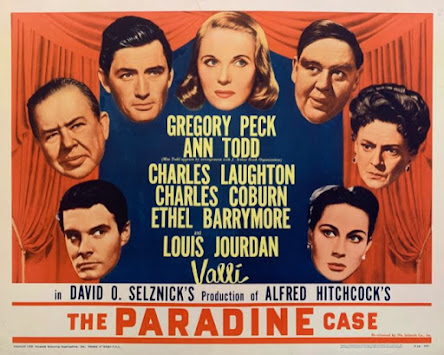 The Paradine Case trivia
Why watch this film?
To watch the film on YouTube, click on the link below.
To join the discussion on June 28, 2021, at 6:30 p.m. Central Time, click here. Once you RSVP, you will be sent an invitation with links to the discussion on Zoom.
Discussion questions:
Posted by Stephen Reginald at 6:56 PM