Orson Welles pursues Rita Hayworth in “The Lady from Shanghai”

The Lady from Shanghai (1947) is a film noir directed by Orson Welles and starring Rita Hayworth, Orson Welles, and Everett Sloane. Initially snubbed by the critics upon its initial release, the film has garnered a reputation for its overall production and cinematography.

Michael O’Hara (Welles) rescues a stunning blonde named Elsa Bannister (Hayworth) from three assailants in Central Park. Elsa and her attorney husband Arthur Bannister (Sloane) are sailing from New York to San Francisco by way of the Panama Canal. Out of appreciation for saving her, Elsa offers Michael a job on their yacht. Although Michael is attracted to Elsa, he is somewhat reluctant to join the crew. After some persuasion, Michael joins Elsa and Arthur on their voyage. During their journey, Elsa confides to Michael that her marriage is no good and that she is afraid of Arthur. She also expresses romantic feelings for Michael which only complicates things.

Is Elsa telling Michael the truth? Is Arthur really out to harm her? 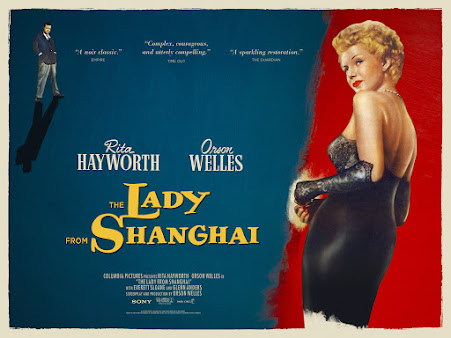 Rita Hayworth (1918 - 1987) was an American actress, dancer, and producer. She was one of the biggest stars of the 1940s and was the top pin-up among GIs during World War II. Hayworth was Gilda (1946) opposite Glenn Ford. A still from this film made it to the cover of Life magazine where she was dubbed “The Love Goddess,” a title she hated. An accomplished dancer, she starred with Fred Astaire in two films: You’ll Never Get Rich (1941) and You Were Never Lovelier (1942). In 1944 she starred in Cover Girl with Gene Kelly. Other popular Hayworth films include Tonight and Every Night (1945), Down to Earth (1947), The Loves of Carmen (1948), Affair in Trinidad (1952), Miss Sadie Thompson (1953), Fire Down Below (1957), Pal Joey (1957) where she received top billing over Frank Sinatra and Kim Novak, Separate Tables (1958), and They Came to Cordura (1959). Hayworth was diagnosed with Alzheimer’s disease, which contributed to her death at age 68.

Everett Sloane (1909 - 1965) was an American character actor who worked steadily in radio, theatre, films, and television. He had early success in the 1930s on the radio playing Bulldog Drummond’s sidekick, Denny. Due to his work in radio, he crossed paths with Orson Welles where he became part of Welles’s Mercury Theatre. Welles cast Sloane as Mr. Bernstein in Citizen Kane (1941), which he wrote and directed. Apart from movies, Sloane also guest-starred on numerous television shows including The Twilight Zone, Perry Mason, The Andy Griffith Show, and The Dick Van Dyke Show. Sloane took his own life fearing he was going blind. He was only 55 years old.

The Lady from Shanghai trivia

Why watch The Lady from Shanghai

It’s written, directed, and produced by Orson Welles, which always makes for good viewing and discussion.

Rita Hayworth makes a great femme fatale and looks stunning as a blonde.

The plot, like The Big Sleep (1946), is incomprehensible, which somehow makes it more interesting.

To join the discussion on June 21, 2021, at 6:30 p.m. Central Time, click here. Once you RSVP, you will receive an invitation and link to the discussion on Zoom via email.
Discussion questions:
Posted by Stephen Reginald at 7:46 PM