How Green Was My Valley (1941) was an American drama film directed by John Ford and starring Walter Pidgeon, Maureen O’Hara, Donald Crisp, Anna Lee, and Roddy McDowall. It is based on the best-selling novel of the same name by Richard Llewellyn. The novel was published in 1939 and 20th Century-Fox bought the film rights and had originally planned to film in color on location in Wales. Studio chief Darryl F. Zanuck had envisioned an epic like Gone with the Wind, but World War II made that impossible. 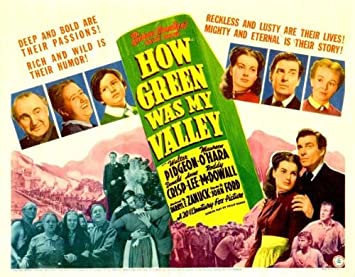 The film is told in flashback as Huw Morgan, the McDowall character, now a grown man is leaving the beloved valley home of his youth. He tells the story of a time before the coal dust from the mines hadn't blackened his village and the surrounding area and a time when his father and all his brothers worked in the coal mines. In the beginning, working in the mine was decent, honorable work that the men were proud of. Eventually, things changed and the men decide to unionize with the help and approval of the new minister Mr. Gruffydd (Pidgeon). This disturbs miner Gwilym Morgan (Crisp) and for a time alienates him from his five sons who championed the union. Angharad Morgan (O’Hara) longs for the love of Mr. Gruffydd but will his devotion to the church get in the way of their relationship? 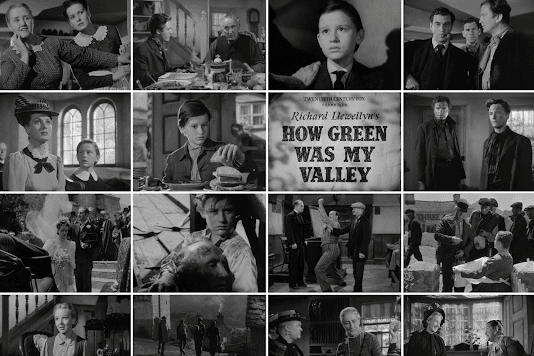 John Ford (1894 - 1973) was an American film director who won a record four Academy Awards, more than any other director in history. He is perhaps best known for his western films, but ironically the Academy Awards he won weren’t for his classic westerns like Stagecoach (1939) and The Searchers (1956). Ford got his start in silent film, first as an actor, then as a writer-director. He directed many silent films including the epic The Iron Horse (1924). Once the sound era arrived, Ford was one of its first pioneers. He hit his stride in the 1930s with films like The Lost Patrol (1934), The Whole Town’s Talking (1935), and The Informer (1935), which brought Ford his first Academy Award for Best Director. Other popular Ford films include The Hurricane (1937), Wee Willie Winkie (1937), Young Mr. Lincoln (1939), Drums Along the Mohawk (1939), and The Grapes of Wrath (1940) the last three all starring Henry Fonda. He also had a long collaborative relationship with John Wayne. Wayne starred in many classic Ford films including She Wore a Yellow Ribbon (1949), The Quiet Man (1952), The Searchers, and The Man Who Shot Liberty Valance (1962).

Walter Pidgeon (1897 - 1984) was a Canadian-American actor. During his long career, he was nominated for two Best Actor Academy Awards—Mrs. Miniver (1942) and Madame Curie (1943). Pidgeon worked on the stage before he entered films, making his Broadway debut in 1925. When he starting working in film, he starred in musicals. Once the interest in musicals declined, he began making a name for himself in dramas and comedies during the mid-1930s. His lead role in How Green Was My Valley restored his popularity. He was first paired with Greer Garson in Blossoms in the Dust (1941). They made a total of eight films together, making them one of the screen’s most popular acting teams. Some of their other films include Mrs. Miniver (1942), Mrs. Parkington (1944), Julia Misbehaves (1948), and That Forsyte Woman (1949). Pidgeon has success on his own in films like Week-End at the Waldorf (1945), The Bad and the Beautiful (1952), and the science fiction classic, Forbidden Planet (1956). One of Pidgeon’s last film roles was Funny Girl (1968) where he portrayed Florenz Ziegfeld.

Maureen O’Hara (1920 - 2015) was an Irish-American actress and singer. In her native Ireland, O’Hara trained with the Abbey Theatre at age 14. She screen-tested for the role of Mary Yellan in Jamaica Inn at age 19. Director Hitchcock wasn’t impressed with O’Hara’s test but Laughton persuaded him to cast her. After finishing the film, O’Hara moved to Hollywood where she was signed to contract at RKO. In 1941 she starred in How Green Was My Valley, her first collaboration with director John Ford. She starred alongside Tyrone Power in The Black Swan (1942), The Spanish Main (1945) with Paul Henreid, and Sinbad the Sailor (1947) with Douglas Fairbanks Jr. That same year she starred in the Christmas classic Miracle on 34th Street with John Payne, Edmund Gwenn, and a young Natalie Wood. Other popular films include The Quiet Man (1952), The Parent Trap (1961), and McLintock! (1963).
Donald Crisp (1882 - 1974) was an English actor, producer, director, and screenwriter whose career began in the silent era into the 1960s. He played Ulysses S. Grant in D. W. Griffith’s silent epic The Birth of a Nation (1915). Crisp worked as an assistant to Griffith where he acquired the desire to be a director himself. He directed The Navigator  (1924) starring Buster Keaton and Don Q, Son of Zorro (1925) starring Douglas Fairbanks. Once the talkies arrived, Crisp devoted himself to acting in supporting roles in films like Mutiny on the Bounty (1935), Wuthering Heights (1939), The Valley of Decision (1945), and National Velvet (1944). His last film role was in Spencer’s Mountain (1963) with former film costars Henry Fonda and Maureen O’Hara.
Roddy McDowall (1928 - 1998) was a British-born American actor. He started his career as a baby model and then began appearing in films as a young child in England. When he came to Hollywood, he became an in-demand child actor where he appeared in dozens of films including My Friend Flicka (1943), Lassie Come Home (1943), The White Cliffs of Dover (1944), and Thunderhead, Son of Flicka (1945). McDowell was able to successfully transition from child actor to adult actor appearing in lead and supporting roles in films like Midnight Lace (1960), The Longest Day (1962), Cleopatra (1963), and That Darn Cat! (1965). He may be best known as Cornelius, one of the intelligent apes in The Planet of the Apes (1968), its sequels, and short-lived TV series. McDowall also served as a producer of Overboard (1987) as well as co-starring with Goldie Hawn and Kurt Russell.
How Green Was My Valley trivia
Why watch this film?
The Best Picture nominees for 1941
How Green Was My Valley-20the Century-Fox
Blossoms in the Dust-MGM
Citizen Kane-RKO
Here Comes Mr. Jordan-Columbia
Hold Back the Dawn-Paramount
The Little Foxes-RKO
The Maltese Falcon-Warner Bros.
One Foot in Heaven-Warner Bros.
Sergeant York-Warner Bros.
Suspicion-RKO
Interestingly, The New York Times declared Preston Sturges’s The Lady Eve the Best Picture of the Year; it wasn’t even nominated for Best Picture by the Motion Picture Academy.
To watch the film on YouTube, please click the link below.
To join the discussion on Zoom on June 14, 2021, at 6:30 p.m., click the link here. Once you RSVP, you’ll receive an invitation and links to join the discussion.
Discussion questions
Posted by Stephen Reginald at 5:24 PM