Katie Holstrom (Young), a Swedish-American leaves home to go to nursing school. On her way to Capitol City, she is taken advantage of by barn painter Adolph Petree (Rys Williams). He steals her money and leaves her stranded at a motel 60 miles from Capitol City. Humiliated and afraid to tell her parents about her situation, she takes a job as a maid for Agatha Morley (Barrymore) and her son, U. S. Representative Glenn Morely (Cotten). Agatha is the head of a powerful political family which is of interest to Katie.

Impressed by Katie’s work ethic and ability to charm everyone including the crusty butler Joseph Clancy (Bickford). Another bonus, her coffee is much better than Clancy’s which must be taken with alcohol to blunt its bitter taste. Glenn Morley takes notice of Katie’s good qualities and courts her much to the delight of his mother.

When Katie learns that the Morleys are backing Anders J. Finley (Art Baker) for Congress, Katie shows her disapproval by asking him pointed questions of Finley at a town hall meeting introducing him as a candidate. So impressed with Katie’s questioning, the opposition party asks Katie to run for Congress. She accepts their invitation and quits her job with the Morleys.

Will Katie be able to handle the rough and tumble ways of American politics? Will she be taken seriously as a viable candidate and will Glenn stand by her no matter what troubles lie ahead? 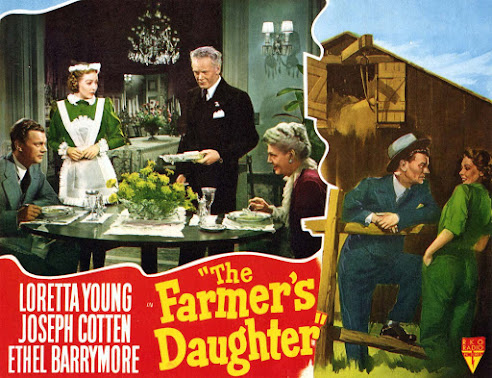 H. C. Potter (1904 - 1977) was an American theatrical producer and director, and a director of motion pictures. Potter graduated from Yale University in 1926 and was part of the Yale Dramatic Association. He founded a theater group, the Hampton Players based in Southampton, Long Island. He eventually made his way to Hollywood where he eventually became a film director. Some of his popular films include The Shopworn Angel (1938) starring Margaret Sullivan and James Stewart, The Story of Vernon and Irene Castle (1939) starring Fred Astaire and Ginger Rogers, Mr. Lucky (1943) starring Cary Grant and Laraine Day, and Mr. Blandings Builds His Dream House (1948) starring Cary Grant, Myrna Loy, and Melvyn Douglas.

Loretta Young (1913 - 2000) was an American actress who can trace her start to the days of silent films where she performed as a child actress. Young made the transition to talking pictures as an adult with almost immediate success. As an adult starred opposite some of Hollywood’s most popular leading men including James Cagney, Clark Gable, Tyrone Power, Gary Cooper, and Cary Grant. Young made many films during the pre-code era including Platinum Blonde (1931), Taxi! (1932), They Call It Sin (1932), Employee’s Entrance (1933), and Midnight Mary (1933). Darryl Zanuck signed Young to a contract at Twentieth Century-Fox and paired her with Tyrone Power, the studio’s top male star in several hit films including Love is News (1937), Cafe Metopole (1937), and Second Honeymoon (1937). Unsatisfied with the roles Zanuck was providing her with, Young left the studio and became a freelance artist. On her own, Young starred opposite Alan Ladd in two films, starred alongside Gary Cooper in Along Came Jones (1945), The Stranger (1946), The Bishop’s Wife (1947) with Cary Grant and David Niven, and Rachel and the Stranger (1947) top-billed over William Holden and Robert Mitchum. After her film career was winding down, Young became a huge star on television when the medium was in its early stages.

Joseph Cotten (1905 - 1994) was an American film, stage, radio, and television actor. Cotten achieved fame on Broadway in the original stage productions of The Philadelphia Story and Sabrina Fair.  He became famous worldwide after appearing in Citizen Kane (1941) and The Magnificent Ambersons (1942). As one of the most popular leading men of the 1940s, Cotten starred in Shadow of a Doubt (1943), Gaslight (1943), Duel in the Sun (1946), and The Third Man (1949). Cotten alternated between work on stage and film into the late-1950s. Cotten also appeared on television guest-starring on The Name of the Game, Cimarron Strip, and Ironside. Cotten’s last film role was in 1981.

Ethel Barrymore (1879 - 1959) was an American stage and film actress and part of the famous Barrymore family of actors. Her equally famous brothers were Lionel and John Barrymore. Barrymore got her start on the stage and she was among its brightest stars for many years. Barrymore also had a successful career on the other side of the Atlantic in London where she starred in Peter the Great. She achieved one of her biggest Broadway successes in W. Somerset Maugham’s comedy, The Constant Wife (1926). Barrymore was a popular character actress in film during the 1940s. She won the Academy Award for Best Supporting Actress for her performance in None but the Lonely Heart (1944) opposite Cary Grant who played her son. Other film roles include The Spiral Staircase (1946), The Paradine Case (1947), and Pinky (1949).

Discussion questions:
Posted by Stephen Reginald at 11:37 AM