Meet John Doe (1941) is a comedy-drama directed by Frank Capra and starring Gary Cooper and Barbara Stanwyck. The screenplay is by frequent Capra collaborator, Robert Riskin. The cinematography is by George Barnes (Rebecca) and the music is by Dimitri Tiomkin (It’s a Wonderful Life).
When Ann Mitchell (Stanwyck) gets fired from her job as a newspaper columnist, her final column focuses on “John Doe” who threatens to commit suicide on Christmas Eve because of all the injustice in the world. Ann parlays this fictional column into a sensation for the newspaper, as well as a financial boon to herself. In order to keep the stunt going and circulation rising, Ann and the new editor, Henry Connell (James Gleason) hire John Willoughby (Cooper), a minor league ballplayer who is down on his luck to portray John Doe.
As John Doe, Willoughby makes speeches and personal appearances, causing a sensation whenever he goes out in public. Doe’s love your neighbor philosophy spreads and John Doe clubs pop up all over the country, attracting the attention of the paper’s owner D. B. Norton (Edward Arnold), who has political ambitions. Norton plans on using the John Doe clubs to help elect him president!
Will his scheme be successful? Will the John Doe movement survive?
Frank Capra (1897 - 1991) was an American film director, producer, and writer. During the 1930s and 1940s, Capra’s films were among the most popular and awarded films. By 1938, Capra has won three Best Director Academy Awards. Born in Italy, Capra immigrated to the United States with his family when he was five years old. By sheer determination and his self-described cockiness, Capra talked his way into the movie business. He found a great home at “Poverty Row” studio, Columbia Pictures. At Columbia he had a major success with It Happened One Night (1934), which swept all the major categories at the Academy Awards that year. This helped turn Columbia Pictures from a Poverty Row studio into a major one. Other Capra successes include You Can’t Take It with You (1938), Mr. Smith Goes to Washington (1939), and It’s a Wonderful Life (1946).
Gary Cooper (1901 - 1961) was an American film actor who was known for his down-to-earth, understated acting style. He was a major star for almost four decades until his untimely death at age 60. Cooper got his start in silent film but easily made the transition to sound. During the early 1930s, he became a major star in films like A Farewell to Arms (1932), The Lives of a Bengal Lancer (1935), and Mr. Deeds Goes to Town (1936). Other popular Cooper films include Meet John Doe (1941), Sergeant York (1941), The Pride of the Yankees (1942), and For Whom the Bell Tolls (1952). Cooper won two Best Actor Academy Awards: Sergeant York and High Noon (1952).
Barbara Stanwyck (1907 – 1990) was an American film star who got her acting start with a supporting role on Broadway in a play called The Noose (1926). The next year she had the lead in another Broadway production, Burlesque which was a huge hit. She eventually made it to Hollywood where her success was not immediate. Director Frank Capra saw something in Stanwyck and he educated her in filmmaking and film acting and the rest is history. Stanwyck was nominated four times for the Best Actress Oscar—Stella Dallas (1937), Ball of Fire (1941), Double Indemnity (1945), Sorry, Wrong Number (1948)—and remains one of the most beloved movie stars from Hollywood’s Golden Age.
The amazing supporting cast includes Edward Arnold, Walter Brennan, Spring Byington, James Gleason, Gene Lockhart, Irving Bacon, and Regis Toomey. 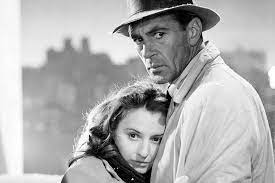 Why watch this film?
To watch the film on YouTube, click the link below.
Meet John Doe trivia:
To join the discussion on September 20, 2021, at 6:30 p.m, Central Time, click here. Once you RSVP, you will receive an invitation and a link to the discussion on Zoom.
Discussion questions:
Posted by Stephen Reginald at 6:38 PM