The Snows of Kilimanjaro (1952) is an American drama directed by Henry King and starring Gregory Peck, Susan Hayward, and Ava Garnder. The film is based on a short story of the same name by Ernest Hemingway published in Esquire Magazine in 1936.

The plot centers around Harry Street (Peck) a man who is suffering from an infection he contracted while on safari in Africa. As he is waiting to die, he contemplates his life. His past life with Cynthia Green (Gardner) and his present life with Helen (Hayward) who is determined not to let him die.

A huge commercial and financial success when first released, it was the number two box office hit of 1952, second only to The Greatest Show on Earth that went on to win the Academy Award for Best Picture. 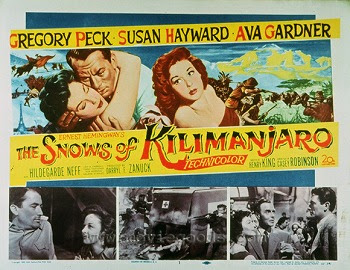 Henry King (1886 - 1982) was an American actore and director. He was nominated for two Academy Awards for Best Director and seven films that he directed were nominated for Best Picture including The Song of Benadette (1943) where he directed Jennifer Jones to a Best Actress Academy Award. While under contract to Twentieth Century-Fox he directed many films starring Tyrone Power and Gregory Peck. Some popular films directed by King include Lloyd's of London (1936), In Old Chicago (1937), Jesse James (1939), Twelve O'Clock High (1949), The Gunfighter (1950), David and Bathsheba (1951), The Sun Also Rises (1957), and The Bravados (1958).

Gregory Peck (1916 – 2002) was one of the biggest stars in Hollywood. He had three Best Actor nominations early in his career for The Keys to the Kingdom (1944), The Yearling (1946), Gentleman’s Agreement (1947), and Twelve O’Clock High (1949). He had non-exclusive contracts with David O. Selznick and Twentieth Century-Fox, which gave him great flexibility in the roles he chose to play. Other classic Peck film roles include Roman Holiday (1953), The Big Country (1958), The Guns of Navarone (1961). He finally won a Best Actor Academy Award for his iconic portrayal of Atticus Finch in To Kill a Mockingbird (1962).

Susan Hayward (1917 – 1975) was an Academy Award-winning actress for her role as Barbara Graham in I Want to Live (1958). Hayward worked as a fashion model but traveled to Hollywood in 1937 to try out for the role of Scarlett O’Hara. She didn’t win that coveted role, but she secured a film contract. Hayward’s career took off in the late 1940s when she was nominated for Best Actress for Smash-Up, the Story of a Woman (1947). She received four more Best Actress nominations for My Foolish Heart (1949), With a Song in My Heart (1952), I’ll Cry Tomorrow (1955), and I Want to Live. Later in her career, Hayward replaced Judy Garland as Helen Lawson in Valley of the Dolls (1967).

The Snows of Kilimanjaro trivia: