Barry Fitzgerald, Walter Huston, and Louis Hayward in "And Then There Were None"

And Then There Were None (1945) is a mystery movie directed by Rene Clair and starring Barry Fitzgerald, Walter Huston, and Louis Hayward. The film is an adaptation of Agatha Christie's 1939 novel of the same name.

Eight strangers are invited to a small isolated island off the coast of Devon, England, by a Mr. and Mrs. Owen. Two newly-hired servants, Thomas and Ethel Rogers greet them to the secluded mansion, but their hosts are absent. As the guests sit down to dinner, they notice a centerpiece featuring figurines of ten Indians. Thomas plays a record and a man's voice accuses them all of the murder!

Are they really all guilty? Is this all a cruel game concocted by the mysterious Mr. and Mrs. Owen? 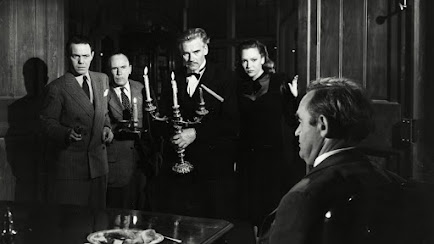 Rene Clair (1898 - 1981) was a French film director and writer. He directed silent films in his native France but was lured to Hollywood where he directed five films. His first American film was The Flame of New Orleans (1941) starring Marlene Dietrich. The film was not a success and it would be a year before he made another American film. His most popular American film was And Then There Were None (1945) based on Agatha Christie’s novel of the same name. After World War II, Clair returned to France where he was considered one of that country’s best film directors.

Walter Huston (1883 - 1950) was a Canadian singer, stage, and film actor. He is also the patriarch of the Huston clan that includes his writer-director son John, and his granddaughter, actress Anjelica. Huston worked in the theater, with roles on Broadway where he made his debut in 1924. Once talking pictures began in Hollywood, Huston worked as both a leading man and also a character actor. Some of Huston’s films include The Virginian (1929), Rain (1932), Gabriel Over the White House (1933), The Devil and Daniel Webster (1941), and The Treasure of the Sierra Madre (1948) for which he won the Academy Award for Best Supporting Actor, directed by his son John. Huston’s last film was The Furies (1950) co-starring Barbara Stanwyck and Wendell Corey.

Louis Hayward (1909 – 1985) was a British-American actor. He worked on the London stage under the tutelage of Noel Coward. He made some films in England in the early 1930s and came to Broadway in 1935 working with Alfred Lunt and Lynn Fontanne in Noel Coward’s Point Valaine. His Broadway fame brought him to Hollywood where he was cast in some minor roles before getting starring roles in The Man in the Iron Mask (1939), My Son, My Son! (1940), and The Son of Monte Cristo (1940). Hayward was married to Ida Lupino from 1938 to 1945.

Posted by Stephen Reginald at 5:58 PM