The Bishop’s Wife (1947) is a fantasy romantic comedy directed by Henry Koster and starring Cary Grant, Loretta Young, and David Niven. The film was produced by Samuel Goldwyn with cinematography by Gregg Toland and music by Hugo Friedhofer.
Bishop Henry Brougham (Niven) is preoccupied with the construction of a new cathedral for his congregation that it overwhelms his entire life and alienates him from his wife Julia (Young) and young daughter (Karolyn Grimes). In a desperate moment, the Bishop asks God for help and guidance. Enter an angel named Dudley (Grant) who helps the Bishop organize his life to better serve his church and family. When Dudley begins cheering up a disillusioned Julia, he finds himself falling in love with her. Will his mission to help rekindle the love the Bishop and Julia have for one another be a success or failure? 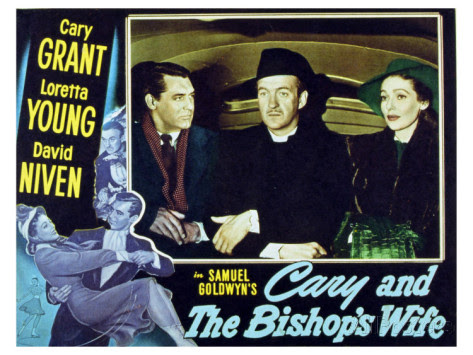 Henry Koster (1905 - 1988) was a German-born film director. He signed a contract with Universal Pictures in 1936. At the time, he didn't speak English but he convinced the studio to let him make Three Smart Girls (1936), which was Deanna Durbin’s first starring film role. The movie was a huge success and saved Universal from bankruptcy. Koster convinced Universal to sign Abbott and Costello to a film contract. The comedy duo was a box office sensation during the 1940s, making the studio millions. Later in Koster’s career, he directed Harvey (1950), My Cousin Rachel (1952), which was Richard Burton’s American film debut. He directed Burton again the next year in The Robe, which was the first film to be filmed in CinemaScope. Other films include Desiree (1954) with Marlon Brando and Jean Simmons, Flower Drum Song (1960) starring Nancy Kwan, and The Singing Nub (1965) starring Debbie Reynolds.
Cary Grant (1904 – 1986) was an English-born American actor who became one of the most popular leading men in film history. Grant started his career in vaudeville before heading to Hollywood. He became a superstar in the late 1930s in a series of screwball comedies including The Awful Truth (1937) with Irene Dunne. He was a memorable C. K. Dexter Haven in The Philadelphia Story (1940) opposite Katharine Hepburn and James Stewart. He received two Best Actor nominations: Penny Serenade (1941) and None but the Lonely Hearts (1944). Other classic Grant films include Gunga Din (1939), Only Angels Have Wings (1939), and Arsenic and Old Lace (1944). He made four popular films with Alfred Hitchcock: Suspicion (1941), Notorious (1946), To Catch a Thief (1955), and North by Northwest (1959). He was presented with an Honorary Oscar at the 42nd Academy Awards in 1970.
Loretta Young (1913 - 2000) was an American actress who can trace her start to the days of silent films where she performed as a child actress. Young made the transition to talking pictures as an adult with almost immediate success. As an adult starred opposite some of Hollywood’s most popular leading men including James Cagney, Clark Gable, Tyrone Power, Gary Cooper, and Cary Grant. Young made many films during the pre-code era including Platinum Blonde (1931), Taxi! (1932), They Call It Sin (1932), Employee’s Entrance (1933), and Midnight Mary (1933). Darryl Zanuck signed Young to a contract at Twentieth Century-Fox and paired her with Tyrone Power, the studio’s top male star in several hit films including Love is News (1937), Cafe Metopole (1937), and Second Honeymoon (1937). Unsatisfied with the roles Zanuck was providing her with, Young left the studio and became a freelance artist. On her own, Young starred opposite Alan Ladd in two films, starred alongside Gary Cooper in Along Came Jones (1945), The Stranger (1946), The Bishop’s Wife (1947) with Cary Grant and David Niven, and Rachel and the Stranger (1947) top-billed over William Holden and Robert Mitchum. After her film career was winding down, Young became a huge star on television when the medium was in its early stages.
David Niven (1910 - 1983) was a British actor. He won the Academy Award for Best Actor for his performance in Separate Tables (1958). Niven’s film career started in the 1930s with small roles in films like Mutiny on the Bounty  (1935). He soon signed a contract with Samuel Goldwyn and his career took off. He had a supporting role in Wuthering Heights (1939). The film was a major success and increased his profile as an actor. He next co-starred with Ginger Rogers in Bachelor Mother (1939), another big hit. He played a safe-cracker in Raffles (1939) co-starring Olivia de Havilland. Niven worked constantly in film throughout the next four decades. Other films he starred in include Enchantment (1948), Soldiers Three (1951), Around the World in 80 Days (1956). Bonjour Tristesse (1958), Please Don’t Eat the Daisies (1960), and The Pink Panther (1963).
The Bishop’s Wife trivia
To watch the film on YouTube, click the link below.
Why watch this film?
It’s one of the great Christmas classics.
It features three great stars: Grant, Young, and Niven
The film has excellent production values, including cinematography by Greg Toland (Citizen Kane, The Best Years of Our Lives)
The supporting cast features Monty Wooley, Elsa Lancaster, and Gladys Cooper.
To join the discussion on December 20, 2021, at 6:30 p.m. Central Time, click here. Once you RSVP, you will receive an invitation and a link to the discussion on Zoom.
Discussion questions:
Where would you rank this film as far as Christmas movies go? Top-ten? A personal favorite?
Do you think David Niven and Loretta Young made a credible couple?
Do you think Dudley really fell in love with Julia?
What do you think is the film’s main theme?
Did the film end the way you wanted it to? Was it satisfying?
Posted by Stephen Reginald at 4:23 PM