Zachary Scott is “The Southerner” in Jean Renoir’s American classic

The Southerner (1945) is an American drama directed by Jean Renoir and starring Zachary Scott and Betty Field. The movie is based on the novel Hold Autumn in Your Hand (1941). Others in the cast include Beulah Bondi, J. Carrol Naish, and Percy Kilbride.
Sam Tucker (Scott) is a sharecropper who heads his dying uncle’s advice to “Work for yourself; grow your own crops.” Sam, his wife Nona (Field), their two children, and Grandma Tucker (Bondi) head to a 68-acre farm that hasn’t been worked in years. The work ahead of them is tough, but they’re excited to be working for themselves.
Along the way, Sam discovers that not everyone is happy about him working the land. His closest neighbor, Henry Devers (Naish) is downright hostile. Sam does his best to cultivate a good relationship with his neighbor, but it’s tough-going.
It isn’t just unfriendly neighbors that Sam and Nona have to deal with. The weather can be unpredictable and threatens to ruin their cotton crop. Will Sam and Tucker make a success of their farm or will they be forced to go back to being sharecroppers once again?
Jean Renoir (1894 - 1979) was a French film director, writer, and producer. He directed more than forty films. Renoir worked during the silent era until the end of the 1960s. Two of his films La Grande Illusion (1937) and The Rules of the Game (1939) are considered among the greatest films ever made. Renoir fled to the United States when Germany invaded France in 1940. He came to Hollywood and directed Swamp Water (1941) starring Dana Andrews, This Land is Mine (1943) starring Maureen O’Hara and Charles Laughton. The Southerner is considered Renoir’s best American film. Other films he made in America include Diary of a Chambermaid (1946) and Woman on the Beach (1947). He is the son of the renowned artist, Pierre-Auguste Renoir.
Zachary Scott (1914 - 1965) was an American actor on stage and most notably in film. He made his film debut in the film noir The Mask of Dimitrios (1944). As a contract player at Warner Bros.Scott was the perfect slick, film noir villain. Before his career in film noir took off, he starred in The Southerner (1945) directed by Jean Renoir. It would be his role as Monty Beragon in Mildred Pierce (1945) that would be his most enduring role with film fans. Scott worked in film, stage, and television until 1963. He died of a malignant brain tumor.
Betty Field (1916 - 1973) was an American stage and film actress. Field began her acting career on the London stage. She made her film debut in 1939 as Mae in  Of Mice and Men. During the 1940s, she had significant film roles, including playing Daisy Buchanan in the 1949 production of The Great Gatsby. Field preferred theater over film work. She worked in film in mostly supporting roles during the 1950s and beyond. Some of the films she made later in her career include Picnic (1955), Bus Stop (1956), and Peyton Place (1957). Her last film role was in Cooogan’s Bluff (1968) starring Clint Eastwood.
To watch the film on YouTube, click the link below.
Why watch this film?
To join the discussion on January 3, 2022, at 6:30 p.m. Central Time, click here. Once you RSVP, you will receive an invitation to and a link to the discussion on Zoom.
The Southerner trivia
Discussion questions:
Do you think the film portrays Southerners in a negative light?
What did you think of the performances of Scott and Field?
How realistic did you think the film portrayed the lives of poor farmers in the South?
Did you have a favorite supporting character?
Did anything about the film surprise you? 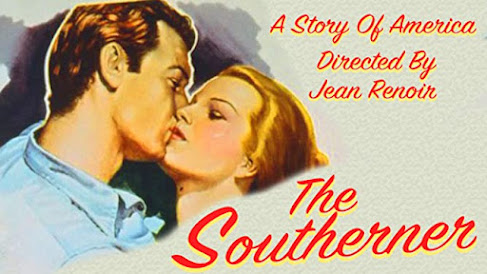 Posted by Stephen Reginald at 1:57 PM