Hangover Square (1945) is an American period film noir directed by John Brahm and starring Laird Cregar, Linda Darnell, and George Sanders. Others in the cast include Glenn Langan, Faye Marlowe, and Alan Napier. The cinematography was by Joseph LaShelle (Laura, The Apartment) and the film score was by Bernard Herrmann (Citizen Kane, Psycho).

Composer George Harvey Bone (Cregar) has no memory of killing a shop owner and then setting his business on fire. It seems George goes into a trance when hears discordant sounds and loses all sense of time. He meets a music hall singer named Netta (Darnell) who uses George to write her songs for her act. When George finds out that Netta is engaged to Eddie Carstairs, he goes into a jealous rage, beating Carstairs and destroying any chance he had with Netta. With this rage and disappointment drive him to kill again? 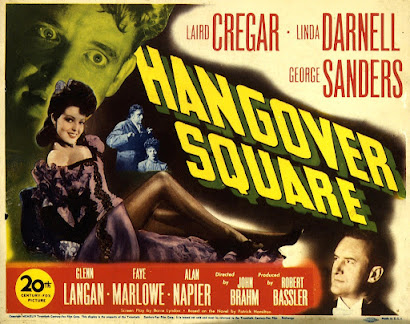 John Brahm (1893 - 1982) was a German film director who immigrated to the United States in 1937. Brahm found work as a director, first employed by Columbia Pictures and then 20th Century-Fox. Brahm's most famous films include The Lodger (1944), Hangover Square, and The Lockett (1946). Brahm also directed a lot of television shows including Alfred Hitchcock Presents, and The Twilight Zone.

Laird Cregar (1913 - 1944) was an American film and stage actor. Cregar came to Hollywood due to his success with the play Oscar Wilde in Los Angeles in 1940. Cregar signed a contract with 20th Century-Fox and quickly became a popular character actor. Due to his large size (he weighed 300 pounds), he was often cast as the bad guy. In an effort to become a leading man in the movies, Cregar went on a crash diet during the productions of The Lodger and Hangover Square. To aid in his dieting, Cregar was prescribed amphetamines which had a negative effect on his system, causing abdominal problems. These problems lead to surgery and eventually a heart attack. He died shortly after at age 31.

Linda Darnell (1923 – 1965) was an American film actress. She signed a contract with 20th Century-Fox at age 15 and became a star almost overnight. She was immediately cast opposite Tyrone Power in Day-Time Wife (1939). She made two films with Power in 1940: Brigham Young and The Mark of Zorro. In 1941, she was again paired with Power in Blood and Sand, which also starred an up-and-coming Rita Hayworth. Darnell’s most famous role was that of Amber St. Clair in Forever Amber (1946), which turned out the be the biggest hit of the year. The role of Amber was the most sought-after female role since the casting of Scarlett O’Hara in Gone with the Wind (1939). Other important films she starred in include Unfaithfully Yours (1948), A Letter to Three Wives (1949), and No Way Out (1950). She died tragically at age 41 in a fire while visiting friends in Glenview, Illinois.

Posted by Stephen Reginald at 9:01 PM