Pickup on South Street (1953) is a film noir set against Cold War intrigue, directed by Samuel Fuller and starring Richard Widmark, Jean Peters, and Thelma Ritter. The supporting cast included Richard Kiley and Milburn Stone. The screenplay was by Fuller with cinematography by Joseph MacDonald.

On a New York City subway, a pickpocket, Skip McCoy (Widmark) steals a wallet out of the purse of a street-smart woman named Candy (Peters). Unknown to both Candy and Skip is the fact that her wallet contained microfilm meant to be delivered to Communist spies. Candy's ex-boyfriend Joey (Richard Kiley) talked her into delivering the microfilm (in an envelope) to Joey's contacts.

Finding who has the microfilm and how to get it back becomes a top priority not only for Joey but for the U.S. government agents training Candy and Skip. Candy contacts a woman named Moe (Ritter) who helps her track down Skip. As the three of them interact and try to outsmart each other, they get into trouble that they aren't quite ready for.

Richard Widmark (1914- 2008) had a sensational movie debut playing the crazy villain Tommy Udo in director Henry Hathaway’s Kiss of Death (1947). His performance won him a Golden Globe Award for New Star Of The Year – Actor. He was also nominated for the Academy Award for Best Supporting Actor for his performance as Udo. Widmark was under contract to Twentieth Century-Fox where he played mostly villains. Later in his career, he started playing more heroic roles in films like Slattery’s Hurricane and Down to the Sea in Ships (both 1949).

Jean Peters (1926 - 2000) was an American film actress. She was under contract with 20th Century-Fox from the late 1940s and early 1950s. Early in her career, she got a boost co-starring with Tyrone Power in The Captain from Castile (1947). She later went on to costar with Dana Andrews, Ray Milland, and Marlon Brando. She was set to play the female lead in The Robe co-starring Richard Burton but was replaced by Jean Simmons when she discovered she was pregnant. Peters married Howard Hughes in 1957 and retired from film. After her divorce from Hughes in 1971, Peters appeared on television in several mini-series. Her last acting role was in Murder, She Wrote in 1988. Today she is probably best remembered for her role as Candy in Samuel Fuller's Pickup on South Street.

Thelma Ritter (1902 - 1969) was an American actress best known for her portrayal of working-class characters. She was nominated six times in the Best Supporting Actress category, more than any other actress in the category. Ritter won the Best Actress in a Musical Tony Award in 1958 for New Girl in Town. She made her unbilled screen debut in Miracle on 34th Street (1947) and a character actress was born. Ritter quickly became a favorite of studio chief Daryl F. Zanuck who cast her in A Letter to Three Wives (1949), All About Eve (1950), The Model and the Marriage Broker (1951), With a Song in My Heart (1952), and Titanic (1953). Perhaps her most famous role was as James Stewart's nurse in Rear Window (1954). Ritter was a good friend of director George Seaton, who cast her first film in Miracle on 34th Street. It was only fitting that Ritter's last film What's So Bad About Feeling Good (1968), was also directed by Seaton.

To join the discussion online on May 16, 2022, at 6:30 p.m. Central Time click here. Once you RSVP, you will receive an invitation with a link to the meeting on Zoom. 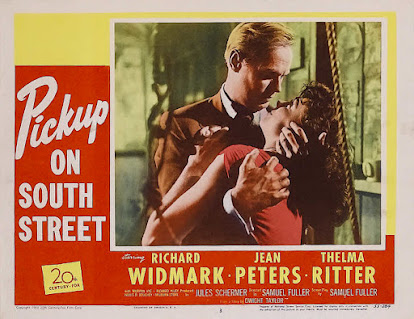 Posted by Stephen Reginald at 1:50 PM