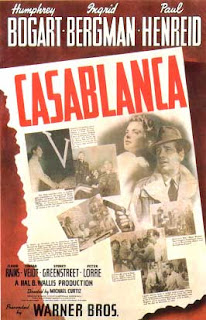 Casablanca, the 1942 classic directed by Michael Curtiz and starring Humphrey Bogart, Ingrid Bergman, and Paul Henreid is the third film to be shown in this continuing monthly series. Winner or three Academy Awards, including Best Picture, Casablanca has become part of the American consciousness, its dialogue ("Here's looking at you kid.") part of our lexicon.

What started out as just another movie during Hollywood's golden age, turned into an instant classic. It made  Bogart a credible leading man, and pushed him out of the shadows of fellow contract players James Cagney, George Raft, and Edward G. Robinson. Bergman in only her fourth American film, became a superstar and one of the most popular movie actresses of the 1940s. For Hungarian-born director Curtiz, Casablanca was his only Best Director win in a career that spanned more than four decades.

Click here to see the original movie trailer.
Posted by Stephen Reginald at 8:33 AM