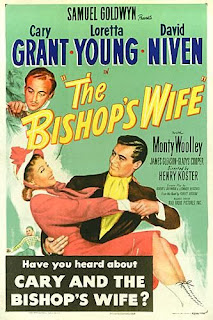 Losing His Religion and His Wife
Bishop Henry Brougham (David Niven) is consumed with the construction of a new cathedral. His wife, Julia (Loretta Young), feels she is losing her husband’s affection as he attempts to raise the funds to build it by flattering a rich, old widow (Gladys Cooper). Has he forgotten the reason he became a clergyman in the first place?

A Christmas Tale for Grownups
Enter an angel named Dudley (Cary Grant). On a mission from on high, Dudley attempts to show the bishop that the things that really matter aren’t made of bricks and mortar. One of the most spiritual of all the Christmas movies, The Bishop’s Wife is like A Charlie Brown Christmas for grownups.

Grant as the Bishop?
The film was originally going to star Dana Andrews as the bishop, Teresa Wright as Julia, and David Niven as Dudley, the angel. As was often the case in Hollywood, the original stars became unavailable and the film was recast with Grant replacing Andrews as the bishop and Young replacing Wright (Wright was pregnant) as his wife. Niven was still on board as Dudley. After Grant read the script, he decided he wanted to play Dudley, not the bishop, much to Niven’s chagrin. It should have been obvious to everyone that Dudley was the perfect part for Grant; he would have made a rather bland Bishop. But as the bland bishop, Niven is perfect! All the cast reshuffling worked out wonderfully and it’s hard to imagine any other actors playing the three leads.


Posted by Stephen Reginald at 7:53 PM