directed by Cary Fukunaga. Charlotte Brontë’s novel, first published in 1847, has been filmed at least 18 times, according to Charles McGrath, the author of the Times piece. Brontë’s classic Gothic romance set the standard, and in many cases the rules, for romantic literature. So it isn’t hard to understand why the story of a poor orphan girl who ultimately finds love and happiness has fascinated filmmakers and filmgoers alike for generations. 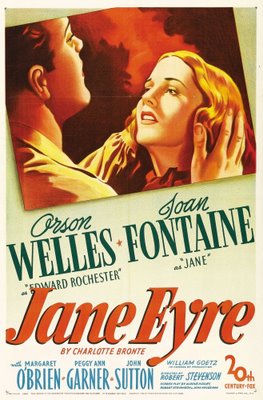 as Rochester and Joan Fontaine

as Jane. Like Fukunaga’s version, it’s not a strict adaptation of the novel. The screenplay written by Aldous Huxley, John Houseman, and Stevenson has a literary quality that captures both the novel’s spirit and tone. That literary quality is bolstered by the extraordinary black and white cinematography by George Barnes, who framed every scene as if it were a painting.


“Desperately Appealing”
Peggy Ann Garner plays the young Jane who is sent to Lowood School by her cruel Aunt Reed, played by Agnes Moorehead. Young Jane’s sad experiences at the strict boarding school are heartbreaking. Under the tyrannical leadership of schoolmaster Mr. Brocklehurst (Henry Daniell), Jane and her friend Helen (played by an unbilled Elizabeth Taylor), are exposed to many indignities. The performances in these early scenes are very affecting. Bosley Crowther in The New York Times said Garner “…is desperately appealing as the tortured child, Jane, and Henry Daniell is monstrously sadistic as her evil schoolmaster.”


When Jane becomes an adult (Fontaine), she decides to make her own way in the world as a governess. When she arrives at Thornfield Hall, Jane is overwhelmed by the estate, but intrigued by her new master, Mr. Rochester (Welles). Hired as a governess for Adele Varens (Margaret O’Brien), Jane is conscientious and caring.


Creativity on a Budget
The film shot during World War II was constrained by the budget limitations that the studio imposed on the production team. By recycling older sets and using props and furnishings on hand at Twentieth Century Fox, the producers created an atmosphere that is both lush and mysterious. The deep shadows and sharp focus give the film its unique texture; it’s the Hollywood dream factory at its creative peak.


The Novel Version
Part of the appeal of the novel is the voice of the narrator, Jane. The 1943 film starts out with a shot of the first page of Jane Eyre with Fontaine’s voice-over reading of the text. Unlike the novel, where Jane is clearly the main character, Rochester is given almost equal status in the Stevenson version. As played by Welles, Brontë’s brooding hero is bigger than life; if he had been paired with a less competent actress, his characterization might have overshadowed Fontaine's Jane.


Fontaine on a Roll
Jane Eyre

(1940). An Oscar winner for another Hitchcock classic, Suspicion

(1941), Fontaine’s career was flying high. Welles on the other hand was no longer the boy wonder of Hollywood. RKO suspended his contract, which almost put it out of business. Welles’s overspending on the back-to-back financial failures Citizen Kane

and The Magnificent Ambersons

greatly lowered his marketability in Hollywood. It’s somewhat amazing that he was offered the role of Rochester and even more amazing that he would get top billing over the more famous Fontaine, who played the title character!


Stevenson Was in Control of Jane Eyre
Much has been said about Welles’s influence on the film’s production, some suggesting that he was really the director. According to Fontaine's memoir, No Bed of Roses

she discounted that notion. Fontaine said that slowly, but surely, Stevenson took charge of the film in spite of Welles’s attempts to run the show. Stevenson had a distinguished directorial career that goes back to the early 1930s. His films from the studio period include the 1941 version of Back Street starring Charles Boyer and Margaret Sullavan. He directed many major movie stars including the likes of Robert Mitchum and Ava Gardner. Stevenson really hit his stride when he signed on with Walt Disney. Stevenson’s first three films for Disney are considered classics, including Johnny Tremain

(both 1957) and Darby O’Gill and the Little People

(1959), which featured a young Sean Connery. He reached his box office and creative peak with the Oscar-winning Mary Poppins

(1964). Stevenson’s output at Disney made him one of the most commercially successful directors during the 1960s and 1970s.


Timeless Appeal
I think the reason the Stevenson version is so successful is the way it expresses the longing and yearning of the main characters in their search for love and acceptance. Fontaine’s Jane is vulnerable, but strong; you identify with her ultimate goodness of character. Through Fontaine’s characterization her yearning becomes our yearning; we want her to find happiness. If Welles’s Rochester is a bit over-the-top, Fontaine’s more subtle performance evens things out. In spite of the overpowering Welles, it’s still Fontaine’s picture. Jane Eyre is the star and we do love Jane.
Posted by Stephen Reginald at 9:50 PM