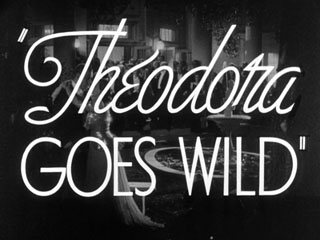 A Forgotten Comedy Classic
After almost a decade of starring in popular melodramas, Irene Dunne reluctantly starred in the comedy Theodora Goes Wild (1936). Dunne had established herself as a dramatic actress with great success and she wasn’t inclined toward comedy. When Theodora Goes Wild was released, it was an instant hit with the public and launched a new phase in Dunne’s film career. Overnight she became one of the movie’s top comic actresses, surprising not only the movie-going public, but Dunne herself.

Two-Picture Deal
Theodora Goes Wild was the first of two movies Dunne was committed to making at Columbia Pictures after she left RKO. As an independent movie star, not under exclusive contract to a major studio, she was reluctant to star in a comedy and perhaps risk her standing as a top movie star. So reluctant was Dunne to star in Theodora Goes Wild that she stayed an extra month on a European vacation hoping the executives at Columbia would cast another actress. When Columbia threatened legal action, Dunne relented.

She Sings, She Dances, She Romances
As Theodora Lynn, Dunne gets to utilize all her talents. Before heading to Hollywood, the actress graduated with honors from the Chicago Musical College (now Roosevelt University). As Theodora Lynn, she gets to sing, play the organ and piano, all skills she obtained while studying music. 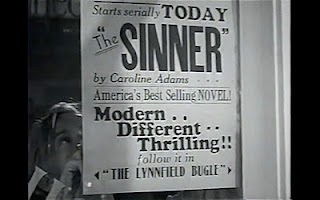 Small Town Girl
Theodora hails from Lynnfield, Connecticut, and was raised by two maiden aunts who just happen to be the town’s leading citizens. Unbeknownst to her aunts and the town is Theodora’s secret life as bestselling author Caroline Adams. The Lover, written by Theodora is too hot for the town’s Literary Circle, of which Theodora and her aunts are members.

The Artist As A Young Man
Theodora meets artist Michael Grant (Melvin Douglas) who challenges her to break out of her shell and to get out from underneath the town of Lynnfield. Grant has his own problems, however. Stuck in a loveless marriage because of his family’s position and political connections, he’s hardly the person to tell anyone how they should live their life. When Theodora learns about Michael’s predicament, she puts a plan in motion to free him.

Wild Success
When released, Theodora Goes Wild was a critical and box office success, propelling Dunne to even greater popularity. The film earned Dunne her second Best Actress Academy Award nomination, five years after her first for Cimarron. Nineteen thirty-six was a very competitive year for screwball comedy films. The classics My Man Godfrey and Mr. Deeds Goes To Town were released that same year to similar acclaim and box office success.

Holds Up Well
Although not as well known as other screwball comedies today, Theodora Goes Wild holds up remarkably well. The more I view it, the more impressed I am. Director Richard Boleslawski, who passed away a year after the film was released, expertly paced Theodora Goes Wild and got great performances out of the more than competent cast. Go “wild” with Theodora. You won’t be disappointed.


This post corresponds with the class Elegant and Madcap: The Incredible Versatility of Irene Dunne—Class starts November 16, 2011. Meets on Wednesdays from 7p.m. - 10 p.m. for six weeks. Classes are held at Facets Film School on Fullerton Ave. in Chicago, IL.
Posted by Stephen Reginald at 12:12 PM