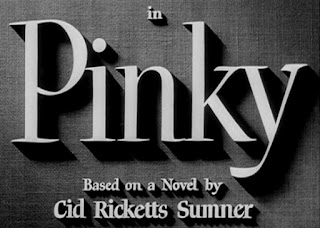 In 1947, producer Darryl F. Zanuck tackled the subject of anti-semitism with Gentlemen’s Agreement. The movie, directed by Elia Kazan, won the Academy Award for Best Picture of the Year. In 1949, Zanuck produced the first Hollywood film to address racial prejudice. The movie was Pinky. When viewed today, it seems dated and filled with stereotypes, but for its time, it was groundbreaking cinema.

Made when Jim Crow laws ruled the South, Pinky tells the tale of a young, light-skinned black women who passes for white. Patricia “Pinky” Johnson (Jeanne Crain) leaves her home in Mississippi to be educated as a nurse up North. On the train ride to college, the ticket-taker assumes she is white and she doesn’t correct him. So begins her deception. While in nursing school, she meets a young doctor (William Lundigan) who falls in love with her. Fearing her secret will be discovered, she returns home to the grandmother who raised her. Up North she was treated with dignity and respect. Down South, she’s treated with cruelty and suspicion. Dicey Johnson (Ethel Waters), Pinky’s illiterate grandmother, worked as a laundress to send Pinky to nursing school. She hoped her granddaughter would return home and help her own people. But Pinky wants no part of this. She’s had a taste of a better life.

Reportedly Lena Horne and Dorothy Dandridge campaigned for the lead. It’s hard to know if Zanuck seriously considered either of these actresses (Linda Darnell also wanted the role). One can only imagine how the audience would have reacted to seeing a black actress holding hands with a white man, let alone kissing him. There is a telling scene towards the end of the film. Pinky is in the midst of a court battle. She’s trying to hold onto property willed to her by Miss Em (Ethel Barrymore), an elderly white woman who became fond of Pinky, while in her care. In the packed courtroom, Pinky’s white boyfriend touches her. As he does this, she stops in her tracks, a look of terror on her face. Viewers today might not understand that in the deep South of the 1940s, that slight physical contact was enough to get the two of them lynched.

Zanuck was criticized for casting Crain, a white actress as Pinky, but he was convinced that audiences would identify with Crain. Zanuck hypothesized that they would experience racial prejudice through Crain’s characterization. Apparently, Zanuck was correct. In Bosley Crowther’s September 30, 1949 review of the film in The New York Times, the sometimes-acerbic critic said, “By giving a winning personality to the much-abused girl Jeanne Crain successfully channels resentment against these bitter experiences to you.”

Besides the film’s focus on the evils of racism, it has a universal appeal. There is an underlying theme that you need to be true to yourself, something that Pinky’s character struggles with throughout the film. She could have had an easier life if she married her doctor boyfriend, moved up North, and never revealed her background (which was his plan for the two of them). When she finally embraces the fact that she is black, she is truly free. She establishes “Miss Em’s Clinic and Nursery School,” on the property the old woman left her, thus fulfilling the dreams of her grandmother.

Pinky was a huge box office success, one of the biggest of the year in fact. All three actresses received Academy Award nominations. Crain was nominated in the Best Actress in a Leading Role category, while Ethel Barrymore and Ethel Waters competed against each other in the Best Actress in a Supporting Role category. All three were shutout. Crain lost to Olivia de Haviland (The Heiress), Ethels Barrymore and Waters lost to Mercedes McCambridge (All The King’s Men). 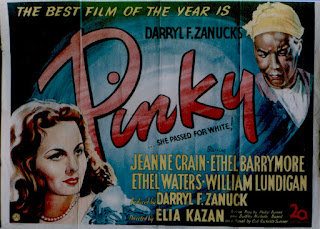 Pinky, not that well remembered, even by classic movie fans, proved that a movie tackling a subject like racism could be a commercial success. The 1950s would produce a flood of “message” pictures like No Way Out (1950) and The Defiant Ones (1958), but if it weren’t for Pinky, those films might never have been made.

Posted by Stephen Reginald at 9:09 PM