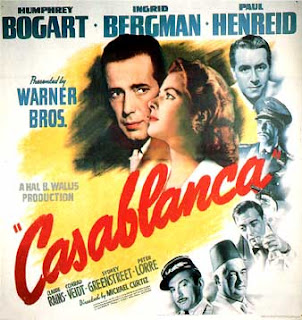 Casablanca had its world premier in New York City on November 26. 1942. The film was a critical and popular success, eventually winning three Academy Awards, including Best Picture. That was 70 years ago. Tonight in Chicago and in cities around the U.S., the classic will have special screenings featuring a digitally remastered and restored print. We’ll be going to ShowPlace ICON at Roosevelt Collection tonight at 7 p.m. and report back on the experience. Casablanca is also being screened at several other theatres in Chicagoland, including AMC East 21, Regal Webster Place 11, and Regal City North Stadium 14 & RPX. For ticketing and other information, click here.

Casablanca stars Humphrey Bogart, Ingrid Bergman, and Paul Henried. So many lines from the film have become part of the American lexicon, including “Here’s looking at you kid” and “I’m shocked, shocked to find that gambling is going on in here!”. That last quote is used by just about every politician on both sides of the aisle, when referring to something obviously bad or corrupt.

For an interesting history on the film, click here.

Posted by Stephen Reginald at 4:56 PM