Boo! You’ve come to the right place. Check out my post below and then click on the links to posts by other bloggers to get their take on Val Lewton, his films, and his legacy. Be sure to leave comments on the various posts and let us know what you think!

Stronger Heroine: Betsy Connell shines in I Walked With A Zombie
One of the things that distinguishes Val Lewton’s horror films from his contemporaries is the strong roles he created for his leading ladies. Lewton’s heroines aren’t just around to scream and cling to their male costars. Lewton’s women are independent and can think and take care of themselves. Nurse Betsy Connell (Frances Dee) in I Walked With a Zombie (1943) is one of the strongest. 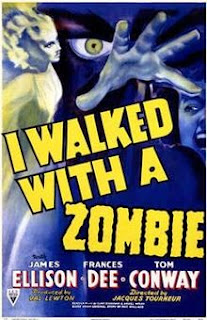 Told in flashback, the film begins in Ottawa, Canada, where Betsy learns about her new job—taking care of a sick woman, Jessica Holland, (Christine Gordon) the wife of the owner of a Caribbean sugar plantation. As the interviewer describes the position, we see snow falling outside the window, a stark contrast to the climate Betsy is about to encounter on the island of St. Sebastian.

Traveling alone to the island by ship, Betsy encounters Paul Holland (Tom Conway), the plantation owner and her new boss. Betsy is dazzled by the beauty she’s encountering, but is cautioned by Paul who says,“…everything seems beautiful because you don’t understand. Those flying fish—they’re not leaping for joy; they’re jumping in terror. Bigger fish want to eat them.” A few moments later Betsy glimpses a falling star. Paul continues by saying, “Everything good dies here, even the stars.” That “warm” welcome foreshadows what is to come.

On her carriage ride to the plantation at Fort Holland, the driver gives Betsy a brief history of St. Sebastian. He talks about slaves being brought there long ago. Is the island living under a curse because of its slave-trader past? Not moved by the driver’s comments, Betsy can only see the natural beauty around her.

Beauty quickly fades to reality when Betsy discovers that her patient is a “mental case,” something she wasn’t prepared for. The rumor among the servants at Fort Holland is that Mrs. Holland is a zombie. Voodoo is vigorously practiced on St. Sebastian and some suggest the voodoo priest can heal zombies. Jessica seems alive, but she doesn’t speak or seem to have any sense of what is going on around her. Along with the suggestion that Jessica is a zombie, we learn that there was a love triangle between Paul, Jessica, and Paul’s stepbrother, Wesley Rand (James Ellison). Wesley who still loves Jessica blames Paul for Jessica’s present condition. Mrs. Rand (Edith Barrett), mother of both Paul and Wesley, desperately wants peace in the family, but there is none to be found.

Like Jane Erye longing for Mr. Rochester, Betsy finds herself having romantic feelings for Paul. Instead of giving into her feelings, Betsy channels them into diligently trying to care for Jessica. She goes so far as enlisting the island’s medical doctor and advocating for a controversial procedure that has been successful with similar cases. When that procedure doesn’t work, Betsy tries something much more risky.

With the help of Fort Holland servant Alma, (Theresa Harris), Betsy takes Jessica to a voodoo ceremony at the Houmfort (voodoo temple). In the dark of night, Betsy escorts Jessica through the fields of sugar cane. This famous Lewton walk, all done on an RKO studio soundstage is almost lyrical in its execution. With no music and only the sounds of nature as a background, it’s one of the most compelling scenes in the entire Lewton canon. When Betsy encounters Carrefour (Darby Jones), a giant of a zombie, guarding the Houmfort, she is surprised and frightened, but she continues and walks past him with Jessica.

Betsy observes the voodoo ceremony respectfully with Jessica. She then notices people walking up to a small building at the Houmfort where folks ask “someone” for help. Betsy waits her turn and explains Jessica’s case. Instead of a word through the door, Betsy is ushered into the structure. Inside she discovers Mrs. Rand. Instead of shrieking in horror or surprise, Besty inquires what all this means. Mrs. Rand, the widow of a missionary, tells her it was easier to reach and teach the natives about sanitation and health precautions if she mixed her advice with a little voodoo.

Betsy returns to the St. Sebastian estate with Jessica, setting a series of events in motion. The voodoo worshipers are convinced that Jessica is a zombie and summon her. Before long Carrefour walks to Fort Holland in search of Jessica. Mrs. Rand, who seems to have control over the zombie, commands him to stop. Carrefour listens and returns to the Houmfort. Although frightened, Betsy is not hysterical. After this event, it becomes clear that Paul is falling in love with Betsy.

The action begins to pick up with Jessica heeding the summons of the voodoo worshipers. She walks toward the locked gate, going no farther until Wesley opens it to let her go. After removing an arrow from a figurehead in the courtyard of the estate, Wesley follows Jessica. Wesley pierces Jessica with the arrow and then carries her lifeless body into the ocean where he commits suicide. The next scene is of spear-fishermen who discover Jessica’s body, floating face up in the water. This is another beautifully shot piece of film the likes of which you’re not likely to see in a horror film. The movie ends with the bodies of Jessica and Wesley being carried to Fort Hollard with a voice-over of what sounds like an island native: “O Lord God most holy. Deliver them from the bitter pain of eternal death. The woman was a wicked woman, and she was dead in her own life. Yea, Lord, dead in selfishness of her spirit. And the man followed her. Her steps led him down to evil. Her feet took hold on death. Forgive him, O Lord, who knowest the secret of all hearts. Yea, Lord, pity them who are dead and give peace and happiness to the living.”

Although the story begins after Jessica’s illness and her affair with Wesley, the contrast between Besty and Jessica is clearly set. Paul, like Maxim de Winter, doesn’t love his “dead” wife. And Wesley, like Jack Favell, believes that Jessica loved him, not Paul. Betsy, unlike the second Mrs. de Winter isn’t lacking in self-confidence; she more than holds her own in the Holland/Rand household. She doesn’t need to be saved by Paul. Betsy can stand on her own, but chooses to love Paul in spite of his past, or maybe because of it.

Frances Dee’s performance as Betsy is one of her best in a career that spanned over six decades. Never a major movie star, Dee was often cast in supporting roles. As Betsy Connell, Dee had a role that required her to carry the picture and she did so most capably. As Lewton heroines go, Betsy is stronger than most. Unusual for a horror heroine in 1943, she has a career, is independent, and strong-minded. She doesn’t shun men or romance, but she’s perfectly capable of standing on her own two feet and making her own decisions. Betsy Connell is a true Lewton heroine in every sense of the word.


Below are more contributions celebrating the extraordinary talent of Val Lewton. You’ll find fascinating and interesting posts written by some of your favorite—or soon to be favorite—classic movie bloggers. And if you want to read more Lewton posts—you know you want to read more—be sure to check out Kristina’s Speakeasy blog; she’s cohosting this event with me. Be sure to check her interesting take on the classic The Ghost Ship. Some blog links may not be up immediately, so check back regularly for updates. Enjoy!


She Blogged by Night  – The Body Snatcher

Old Movies Nostalgia – Man in the Shadows: A Biography of Val Lewton  @moviesnostalgia

@NitrateDiva – Lewton’s use of Point of View & Voice-Over

Classic Becky’s Brain food – I Walked With A Zombie

CP’s  Classical Gas – Isle Of The Dead looks at the value of a great script and whether or not the film was as Lewton itself called it, an unholy mess


More posts! Check out Kristina’s blog to get their links.

Thrilling days of Yesteryear –  The Seventh Victim  an extensive look at the movie’s controversial subject, its influence and its cast @igsjr

The Last Drive-in (Monster Girl) – Curse Of The Cat People  through the themes of the feline, the fearsome female and the fearing child in 2 posts!   part 1  and part 2 @thelastdrivein

Classic Movie Gab – The Body Snatcher all about Karloff’s performance, the real life background of the story & more @pinkpetalz


Classic Screen Screams!
Looking for some classic films to watch during Halloween? Check out these Val Lewton classics by clicking the link here.

Posted by Stephen Reginald at 5:34 AM