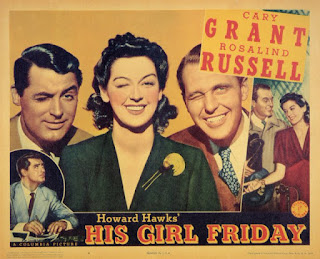 His Girl Friday, directed by Howard Hawks and starring Cary Grant and Rosalind Russell is an adaptation of the Ben Hecht and Charles MacArthur classic Broadway smash, The Front Page. Grant plays Walter Burns, a Chicago newspaper managing editor and Russell is Hildy Johnson an ex-reporter for the same paper and Burns’s ex-wife. On the eve of her marriage to a new man, Burns tries to convince Hildy to come back to the paper and him. Considered one of the greatest classic screwball comedies of all time, His Girl Friday is filled with non-stop one liners and the fastest dialogue ever recorded on film.

Backstory
Howard Hawks originally planned to do a straight remake of The Front Page. During a read-through of the script during auditions, Hawks had his secretary read Hildy Johnson’s lines. Hawks, always a champion of strong women, liked the sound of Johnson’s lines coming out of the mouth of a female. The script was changed to make Hildy the ex-wife of Walter Burns and many think His Girl Friday is better than the film on which it is based.

Casting Call
Hawks had Cary Grant in mind for Walter Burns from the start, but the casting of Hildy Johnson proved problematic. Hawks originally wanted Carole Lombard, who he directed in Twentieth Century (1934). Lombard, one of the biggest stars in Hollywood, was too expensive. Supposedly the role of Hildy was offered to Katherine Hepburn, Claudette Colbert, Margaret Sullivan, Ginger Rogers, and Irene Dunne. All turned the role down. Joan Crawford, coming off her success in The Women, (1939) was even considered. Hawks finally settled on Rosalind Russell. Hawks encouraged ad-libbing on the set, so Russell hired a writer to punch up her dialogue because she thought Grant had all the good lines.


His Girl Friday was #19 on American Film Institute’s 100 Years…100 Laughs and has been selected for preservation in the United States National Film Registry.


Join the Film Club
Come watch this classic in the comfort of “The Venue 1550.” Overflow Coffee Bar will be open so you can grab a drink or snack to be enjoyed during the movie.

Posted by Stephen Reginald at 8:04 AM